If the symbol is there but it doesn’t work, check your BIOS, you’ll have an option to enable usb power delivery . You can enter the BIOS only during startup (before you see the windows icon) by pressing a key specific to your system manufacturer. It’s usually one amongst the function keys or DEL key in some cases . You’ll have more information in your instruction manual .

Note: Was posted to LPT but the mods said it wasn’t fit to be a LPT and removed it. Thought you guys might find it useful.

Edit : Since this seems to be gaining traction, just a reminder to everyone this festive season, to say thanks for the little things we receive from the people around us . It costs us nothing and encourages the person to do even better . And happy holidays!

This is how USB came into universal existence 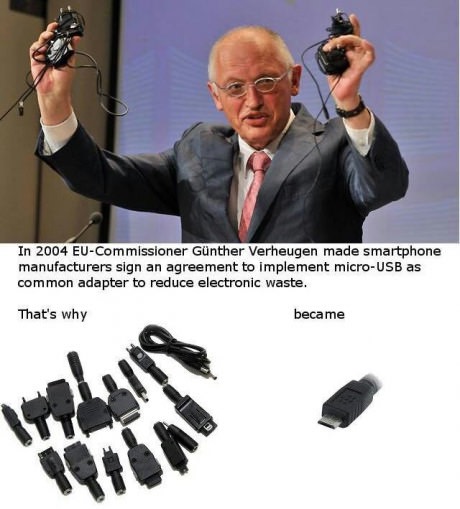 manwelI: Interesting how this is not a LPT but buying a skipping rope is

HenkPoley: Or it is a USB-C & [Thunderbolt 3 port](https://en.wikipedia.org/wiki/Thunderbolt_(interface)) of course.

[Not that common](https://www.ultrabookreview.com/10579-laptops-thunderbolt-3/), but certainly not rare at the high-end.

confused_unicorn: Yes it’s very useful. Mine also has a driver on windows which lets you choose at below what battery percentage the laptop will stop charging devices through this port.

yannicdasloth: This is especially useful if you have any wireless accessories like a mouse or headphones, you’ll be able to charge it while you’re not using your computer and it’ll be ready to go once you start using your pc

Before that, it was only a symbol to designate a mDP port and a thunderbolt port cause apple and Intel couldn’t decide which standard and port to use until then.

11th_hour: Everything that is remotely helpful is deleted for LPT.

callumb2903: Yes I love this feature. Apart from when I turn my laptop off and the blinding lights on my mouse are still on ;-;

pierovera: My laptop was weird about this. I don’t know if it technically had the functionality, but if you plugged in your phone and then suspended the laptop, it would keep charging. However, it wouldn’t respond to devices connected after it had suspended.

Feij0ada: This would be a good LPT.

andz54332: Mine has a Battery that says USB on the inside, guessing it’s the same?

somanydonuts: Good tip! Anyone know what to press to enter change the bios on a Dell Latitude?

FoxBearBear: Yeah, I have a port like this and it’s blazing fast.
BUT plugging my iPhone into it while the laptop is on I get a constant connect/disconnect cycle. It’s impossible to use!

EvenMoreCloselier: Does this work with Apple products?

cs_tiger: on my dell this does not work…

semperli: That’s crazy, right now I’m setting up a gift laptop for a family member and saw a “tip” about that in the paperwork.

Check Reddit while Cortana is talking to herself and boom, here we are.

yourdamncroissants: The setting (at least on Dells) is called USB PowerShare. USB Power Delivery is a newer standard for high-wattage power over USB-C.

wowyesokay: Oh. I thought that meant my laptop had survived a Killing Curse from the Dark Lord. Now slightly less proud of my laptop

deadlypinfish: Wtf. That’s like exactly what the old (and actually useful) life pro tips were all about.

aslgbam: Does this work on macbook?

ForumPointsRdumb: Some without the lightning bolt charge too.

AceBuddy: On a macbook you just have to open the lid to wake the computer then you can shut it and it will continue to provide power.

Muh_Condishuns: >Note: Was posted to LPT but the mods said it wasn’t fit to be a LPT and removed it. Thought you guys might find it useful.

Welcome to Severely Autistic Reddit. Where my sub is *mine mine mine.* **MINE**. Being a mod is like being made a Pinkerton or Brown Shirt back around the turn of the century. They physically resemble 4chan’s “aikctually” meme and derive all their self-worth from weilding a club to maintain “order” with beatings authorized by someone like Mussolini. The rest is slacktivism and maintaining a Dustin Hoffman in Rain Man-level of autism about “what belongs where.”

BloodOath08: Some laptops with a powered USB port require a button combination to turn on the USB port, on my Clevo I have to press FN+Power button.

VitaMint123: This would have been soooooo great to know when I used to carry a laptop with me. Great tip!!

30cuts: I have an Asus eee 901 that will also output power to the USB ports without booting up the machine. There’s no special symbols on it, and in all honesty, may have been a bug rather than an intended feature…

Claree007: I bought a new laptop with Windows 10. I had this experience wherein i thought the laptop was on and plugged my cable in, but late realized that it was actually off. Thought it was something that windows did.

Megstiel_is_my_OTP: I know that I’ve mentioned this before but I can’t remember where. Whenever I plug in my phone to charge on our computer, it always asks if I trust this computer. Makes me wonder what happened in my phone’s lifetime that it’s questioning the integrity of my computer, every single time.

DudeCrabb: Sometimes I bring only my laptop and charger and passively charge my phone as i go. Its like having double battery life or more in some instances. I call it ‘trekking’ my range of motion goes as far as my mind and phone battery allows as I have unlimited data. I can easily google directions and all.

Pwschwa: I found it on the back left toward AC port of my Dell Latitude E7450. I tried plugging in and it didn’t work (just turned laptop off and it had plenty of power left).

Any tips on enabling in the bios?

clairebear_22k: on my acer spin 5 the port that works like this has a battery with usb written inside it.

LittleWhiteGirl: Mine doesn’t even charge my phone if the lid is closed. Is this a settings issue or my computer being cranky?

sturmeh: If it doesn’t you can just sleep your laptop to make them charge your phone or accessories.

TombSv: Why are you turning off your laptop tho?

FatDane: I have one with two s’ in front of the USB symbol itself. Assuming it’s not a nazi USB port, what is it?

Pluckt007: Hey, not everybody can be right all the time. Clearly this is a LPT. I’m gonna go check now…

simmonsg: People turn their laptops off?

Sentient_officeplant: Always on USB ports are the bane of my bedroom music studio existence. So much shit has annoying LEDs on it that I have to mask most of them with electric tape. (poke a tiny hole in the tape to let a little light thru so you know it is working)

I’m excited when I see “good night LED mode” options in BIOS so the computer turns its own LEDs off after post. Add in the USB charging off option and I’m in heaven.

jduder107: Oh shit I thought that meant that the port can only be used to charge the laptop.

NorthsideB: This trick works on Windows 7 and your laptop in sleep mode:

“Open Device Manager (right-click My Computer, select Properties, and Click Device Manager on the left). Expand the Universal Serial Bus Controller section. You will see a few devices called ‘USB Root Hub’. Click on each one and go to its properties. In the Properties window for each USB Root Hub, go to the Power Management tab and uncheck the ‘Allow the computer to turn off this device to save power’ option.”

crunchydavid: It should have been an LPT, because like most, it’s totally wrong.

RulerOf:
>You can enter the BIOS only during startup (before you see the windows icon) by pressing a key specific to your system manufacturer. It’s usually one amongst the function keys or DEL key in some cases . You’ll have more information in your instruction manual .

Hey OP, this isn’t true on most laptops now. Laptops often ship with fast boot enabled which completely cuts off the opportunity to enter the firmware settings menu, and even when it doesn’t the opportunity is so short that you either miss it, or don’t know the correct key to press.

babyenelf: Min doesn’t have that, instead it has the USB symbol and a “SS”. The other one has just the usb symbol.

Athana: That’s why my Razer peripherals lit up when I press a button even though the pc is off?

« YSK in the US Hitting the lock button on an iPhone 5 times in succession will open an SOS option which allows you to quickly and discreetly place a call to 911
YSK: If you cant get a reservation at Beast’s Castle at Disney World, Guest Services may be able to use a little magic. »