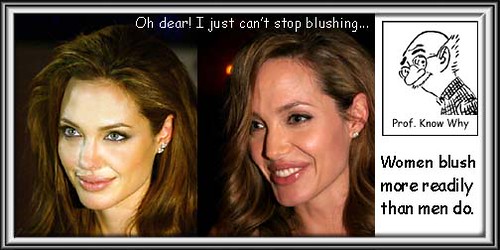 Kore624: Embarrassment makes you go into fight or flight mode, the increased blood flow is so your muscles have the energy to move, and the skin of our face is thinner than other parts of our body and it’s what we see so we notice it more. If you’re blushing you’re likely to be rosey on other parts of your body as well.

caskey: When embarrassed your sympathetic nervous system causes blood vessels to dilate enabling blood to flow more freely, but also causing a reddening of the skin.

whatIsThisBullCrap: The other answers are incorrect. Blushing when embarrassed is also governed by the sympathetic nervous system which activates the flight-or-fight response. But it’s not for the same reason. Just think about it; why would we need more blood in our faces if we were about to run or fight? We do that with our arms and legs, not our cheeks. And if blushing was a fight or flight response, why do we turn white when we’re scared or in danger? The affect of adrenaline is usually to draw blood *away* from skin and into muscles and sensory organs

We don’t know for sure why we blush when embarrassed, but it probably evolved as a form of non-verbal communication. Blushing tells other people thay we recognize we did something socially unacceptable, which made us or someone else uncomfortable. The feeling of embarrassment makes us feel bad so we don’t do it again, and blushing shows everyone else were sorry

« Why don’t all students get tested *before* starting a class, to see if they need it?
YSK- About GoodRX a website to visit for MASSIVE discounts on prescriptions from almost any pharmacy. Very important for people with no insurance. »