datums: Shot four times while escaping. But he made it, and he’s currently recovering.

rGedos: Read somewhere that they hung a South Korean flag in his hospital ward to reassure him that he was safe. Hope he recovers safely.

> “From a medical point of view he was almost dead when he was first brought here,” said the surgeon, Lee.

> The soldier showed signs of depression and possible trauma, in addition to a serious case of parasites that has complicated his treatment, the hospital said in a statement. Lee said last week one of the flesh-colored parasites he removed from the soldier’s digestive tract was 27 cm (10.6 in) long.

I can’t even imagine what he’s been through, risking his life for freedom. This truely has gone on for far too long

solsangraal: also interesting is that on the north side of the dmz there are 3 north korean guards, one facing inward to watch for defectors, the other 2, facing each other to make sure one of them doesn’t try to defect

edit: on the south korean side of the border they have 3 guards all facing the north to watch for acts of aggression because ain’t nobody tryna get *into* north korea

nature_and_grace: Imagine the adrenaline in that moment

joculator: It’s horrifying, I seriously hope he has no family left in North Korea.

StuffyUnicorn: Imagine the kind of life one must have to willingly do this, knowing there is a greater chance of being shot dead than making it the other side.

stecklese: the fact that he took a second to close the jeep door is mind boggling

EyeCWhatUDidThere: Damn. This really made me think about how much I take for granted in life.

CauseSigns: i wish a speedy recovery to this speedy freedom runner

Andy4574: Crossing the DMZ is probably the most dangerous way to defect. Kinda shows how much he wanted to get the fuck out of there.

Gawdzilla: Thank goodness for those South Korean soldiers that would risk their lives for this guy. Good Guys, fuck yeah!

joelberg: Seeing his blood trail from the heat of the blood makes this video even more real.

aloysius_parker: Kudos to the very brave South Korean soldiers who retrieved him. That is some serous humanity.

Amildcaseofutopia: Imagine the worm inside his stomach thinking “wtf is going on?”

OnyxBaird: So now that they violated the armistice, what happens now?

Jeff9Man: When you tour the DMZ, they say that there aren’t supposed to be *any* weapons carried by soldiers on either side.
Also, those blue buildings are built so that half is on the North side and half is on the South side. During the tour, there were two South Korean guards escorting us. When we entered the building, they both went over to the North side of the building. One locked the door and the other held on to his vest so that a North Korean couldn’t pull him through the door.

DeathMavrik: Goddamn i was happy when they said that he was recovering

CynfulPrincess: God this hurts me so much. And good on the South Korean soldiers for getting him. It’s so hard to watch this and know people are still living through this.

Laloblox: Found a map of the interaction, not mine. 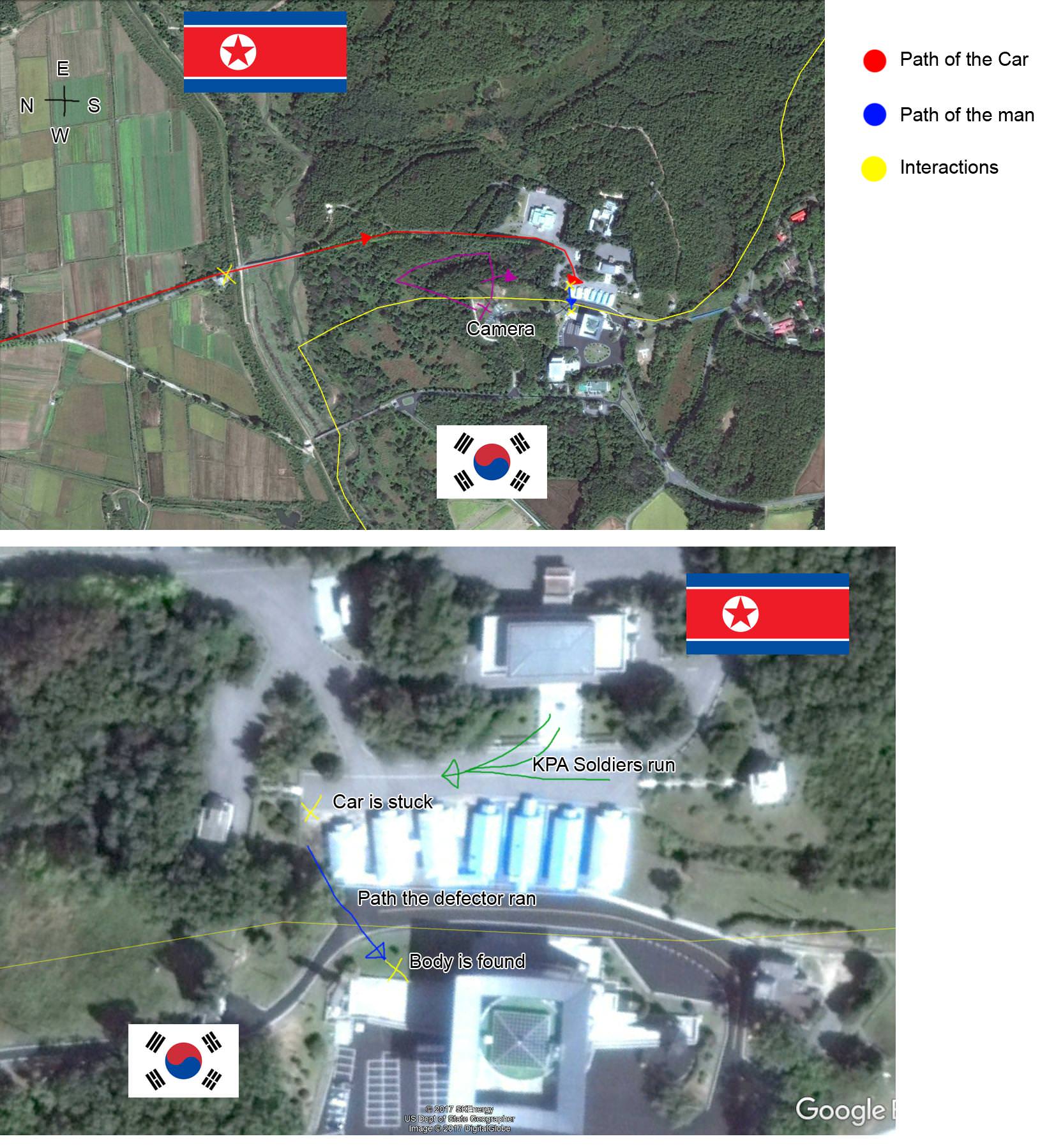 SpuriousJournalist: Humans are pretty awesome. Starved, mentally abused, with death as a reward for failure, he still had the balls to try.

**This** is why we will always win against tyranny.

technique_only: So in 1984, a Soviet citizen defected across [the DMZ in the Joint Security Area](https://en.wikipedia.org/wiki/Joint_Security_Area#1980s) as well. The citizen, Vasily Matusak, was pursued by 30 NK soldiers who fired their guns. The US and SK forces there deployed to safeguard Matusak – one SK soldier was killed, one US soldier wounded.

5 NK soldiers were wounded and 3 killed before a ceasefire was arranged.

It was rumored that NK’s Lt Chul, who commanded NK troops during the [Axe Murder Incident](https://en.wikipedia.org/wiki/Korean_axe_murder_incident), was killed in this fight – rumored because it was never confirmed, except that he has never been seen again.

>Additionally, there were gunshots in the north approximately 20 minutes after the cease fire was effective, and it was reported by senior members of the NNSC to the JSF commander that the KPA commander and one of his key subordinates were summarily executed. The KPA commander was likewise never seen again, however no evidence is adduced for these claims.

buggs147: That was dope. I didn’t realize the DMZ was like that. If you can make it through, you can run to South Korea.

I just want this dude to get a movie where there’s a slow motion montage of him running for his life and freedom while dodging bullets.

Brisk_Avacado: So they shot him and then just left him there rater than killing him or retrieving him? What?

shakkajon: Holy shit. This came right out of an action movie.

Tirayaa: Ok I’m so sorry, I’m not a native English speaker, so I thought he was going to defecate, it was really weird to see this with this in head.

watchdogNKC: 1. Wow it’s sad that life is so bad in places that people will try to kill you for leaving and you still take that risk

2. How did they get footage from North Korea?

newaccount47: How can anyone run so fast with balls that massive?

xXxwiskersxXx: Whoever has updates about his condition should keep reddit informed 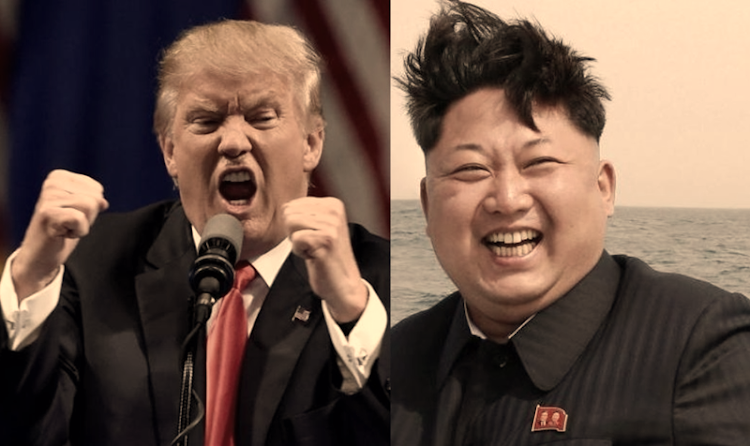 North Korea denies the existence of political prison camps also known as ‘Kwanliso’. The report says testimony from survivors and guards, coupled with satellite imagery makes for overwhelming evidence. The report estimates that between 80,000 and 120,000 political prisoners are still held in the camps. The North Koreans say that many prisoners have “disappeared”, meaning their families never know where they have gone or what happens to them in the future, even if they die in detention. The report describes a brutal and inhuman regime in the camps, with systematic torture, executions, rape and “the denial of reproductive rights enforced through punishment, forced abortion and infanticide”. Hundreds of thousands of people are believed to have died in the camps over the decades and those who do not die are forced to do hard labour and have to endure horrific punishments.

« Chainsaw Elvis
ELI5: How do smelling salts wake you up after you’ve been unconscious? »