FlowSoSlow: So what did they call upper and lower case before the printing press?

RadBadTad: Also another term for lowercase and uppercase is “minuscule” and “majuscule” respectively. 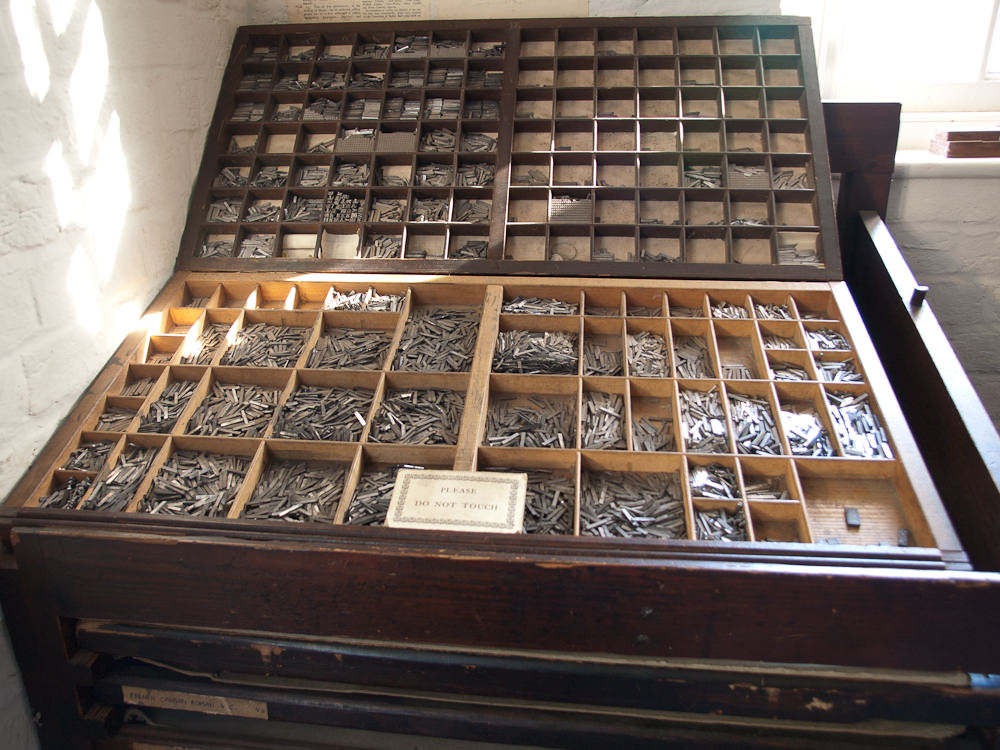 datums: Also, because of this, numbers are technically lowercase.

s1rp0p0: “Stereotype” and “Cliche” also come from the printing press.

Stereotype
> It was originally a term used in letterpress printing, referring to a solid plate of metal cast from a mould taken of a forme (a body of type secured in a metal frame for printing). In other words, a stereotype is a solid metal copy made of the original type.

Cliche
>Interestingly, ‘cliché’ is ultimately onomatopoeic, representing the sound of a mould coming into contact with molten metal.

xEasyActionx: The term “mind your p’s and q’s” also comes from this block type. Because the letters are backwards when setting print type so that it prints in the right directing (like how stamps are opposite of what they print. It is very easy when setting type quickly to mix them up.

Source: my father runs a printing press and still uses block type like this. He also invented Graham cracker and peanut butter sandwiches.

super_schu: whoa this is a good TIL

GrizzlyLeather: I always thought it was because the uppercase letters always filled more of the upper space of the writing area.

Darryl_Lict: I’m so old that in high school we actually had a print shop with printing presses that we set with these letter blocks. I made my mom some business cards. You would lay it out upside down and backwards. Professional printers could easily read upside down. I think we also had a linotype machine, which directly cast molten lead blocks of letters. I think I still have my name set in linotype somewhere around my house.

Lillianeck: And when you had to use all uppercase you were yelling because WHY IS EVERYTHING UP SO HIGH!

AndyWarwheels: This is really cool information.

armcurls: Very glad I read this

dc_addict: why would you keep something you used more often in the lowercase, wouldn’t this mean you had to constantly bend down to reach it?

Hippiedboy: Was in the printing industry for about 15 years towards the end (actually it was over but they couldn’t let the old guy go. Kept him doing wedding invites and letterheads and such) of the linotype era and never knew this. Very Cool info. Thank You.

feedme_ima_troll: 60 years from now some person will be shopping online and be like “why are my items always added to a shopping cart? Why do we use that term?”

“you see, back in the day people would drive to a physical store and literally push around a cart. They would put items in their carts that they wanted to buy…”

toeofcamell: I wonder if anybody would come in before work and put all the lower case letters on the upper case and vice versa just to watch the insanity

biffbobfred: BTW the print thing is why there’s a different between typeface and font. If you’re just talking design, typeface. If you’re pulling actual physical letters with sizes and weights, font.

Arayder: This sounds like one of those TIL’s so outrageously benign that it *couldn’t* be true. But alas, it is. I like it.

Knigar: I call them capitals and small letters so there.

Darnoc777: Some how it sounds more sophisticated than caps and small letters.

Redditdirk: But what makes the lower case easier to get to?

nomadic_stalwart: This sounds pretty crazy to be true.

waveeyang: what were they called before then?

negullah: Kinda late to the printing are we?

command_shift_ayyyye: I believe the phrase “out of sorts” comes from letter press as well! When you have used all of your letters in a font (like all of your available lower case e’s) you are out of that sort and have to substitute other letters or use a letter from another font.

Roberto23: “Mind your ‘p’s & ‘q’s” (pay attention), came about because the letters were also in reverse, and those two were easy to mix up.

_agent_perk: That doesn’t really make any sense to me. You use uppercase at least once a sentence, it’s not like you wouldn’t want easy access to both.

swhertzberg: How do people not know stuff like this?

explodingbarrels: This is a hell of a cool fact. Odd that it would translate as such – at what point in the educational process did we hit: “capital letters, also known as uppercase letters” without the requisite link back to this explanation?

Estebonus: Pretty sure they are called “lowercase” and “capital” letters.

SaidTheHypocrite: Kinda like how we say rewind on digital video. Neat.

RedrickLouanne: Guess you solved the case

nitzua: man this has been posted a lot

sstruemph: So I wonder where they kept the camelCase?

Bobarhino: I always thought there should be a middle case so I could give certain people the finger in type.

Another_Physicist: The invention of printing also increased the pressure to standardize spelling.

moricome: Where does the phrase “Title case” come from then?

ThinkBiscuit: Can confirm: I used to work with a guy who was a typesetter back in the letterpress days.

ZomcEatsAss: I really wanna call bullshit but this is just weird enough that it has to be true.

custompcthrowaway: But what did they call them before the standard of the cases came about?

SomeLutefisk: Another typeface term is leading (pronounced ledding) which is the space between sentences. This came from the fact that type setters would use actual strips of lead to create the space.

opFez: I learned this yesterday because of Vsauce. Why is it always that I learn something and then someone mentions it the next day? Anyway, it’s awesome, right?

woahdude12321: There’s gotta be a term for, like, when no ones ever wondered about something than anything you have to say about it is bullshit

HowardBass: It’s also where the phrase “Mind your P’s and Q’s” comes from. They were often mixed up

lunaticneko: As a kid, when I actually wrote with pencils, my teacher called them capitals and smalls. That is one way to call them, without figuring how the hell cases are involved.

nerbovig: Is there a particular reason we have upper/lower case in the first place? Cyrillic mostly doesn’t, and it makes learning and using the language much easier.

Zah96: One of the first things you learn in typography

makestuf: Vsause is AWESOME!!!!
Every one should watch that YouTube video.

hajamieli: They’re simply called “BIG letters” and “small letters” in many languages. For a fact, I know it’s like this in at least Finnish and Swedish, which are closer related to Chinese than each other.

There was absolutely no relevance of the mnemonic value of uppercase letters reaching higher. That played zero part in the persistence of the terminology. Everyone understood the reference to printing presses throughout the entire expansion of the words.

« Kingfisher catching a fish underwater
TIL if you are thrown out of a Las Vegas strip club, you are entitled to be reimbursed your cover charge and the cost of any alcoholic beverage you purchased. (Las Vegas Code of Ordinances sec.6.06B.090(O).) »