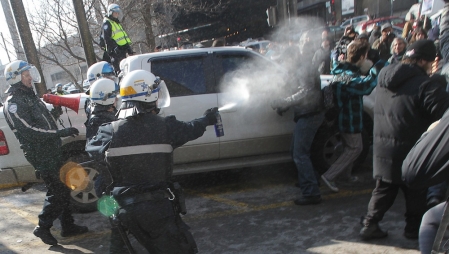 BattleHall: IIRC, part of the reason for banning the use of all chemical weapons in combat, not just the lethal or “cruel” ones, is to prevent inadvertent escalation. In the heat of battle, if you suddenly come under a gas attack, it may be very hard to impossible to tell the difference between a lethal chemical agent and a non-lethal irritant, especially back in the days before sophisticated chemical sensors. As lethal chemical weapons are considered a Weapon of Mass Destruction and a de facto escalation, it would be expected that anyone attacked by them would reply in kind, either with their own “illegal” chemical weapons or other still-legal WMDs, like nuclear weapons.

Gemmabeta: Also, hollow-point and frangible bullets. Banned in war as cruel and excessive, but permitted in policing as they are less likely to shoot through a persona and hit someone standing behind them.

bolanrox: i mean they tried to ban shotguns and crossbows in warfare over the years.

RetardsAdvocate: Well, it’s not like the police will pepper spray or tear gas a crowd, *then mow them down with a machine gun.*

mrshatnertoyou: >Pepper spray is banned for use in war by Article I.5 of the Chemical Weapons Convention, which bans the use of all riot control agents in warfare whether lethal or less-than-lethal.

TimeTraveller-: Next time you go rioting, make a small war declaration 24 hours before going to the street

dontknowhowtoprogram: You must consider that in large enough amounts it will still kill a person without proper protection. Imagine for a second that you are in a fox hole and a cloud of pepper spray wafts across the battlefield and settles in your position blinding you and making it harder and harder to breath. now it makes news that a chemical woepon was used to kill x faction. News is spread and one side decides to take it up a notch “well if the enemy is going to fight dirty then lets see how they like y chemical” Soon no rules of war or obeyed and the ground is poisoned and an errant change of wind direction ends up gassing a village or two. This is why pepper spray is not allowed.

superduperpooperman: “Pepper spray” used in a war would be massively more potent than the riot stuff. This isn’t the keychain shit you buy from a gas station

coinaco: Neil Degrasse Tyson: “The term chemical weapons is actually a misleading designation because all weapons are made of chemicals.”

redditjsb: “Rules of war” has always seemed like an oxymoron to me

I can go pick up a box at the hardware store and load them up for self-defense, but use them in international combat and it’s a war crime according to the Hague Convention.

Fun side benefit to expanding rounds, and one reason the police use them: Since it’s less likely for the bullet to exit at high velocity, there is much less chance for injury to bystanders from pass-through or ricochette! Plus, you put the target down more rapidly.

CamelCash007: Pepper Spray is also illegal in Denmark for Woman to use in self-defense.

missionbeach: I use lemon pepper spray. Once you spray a riot, it’s only good for about a week so we use any leftover on boneless chicken breasts.

derek3hunna: I always imagine a room full of terrorist when I see things like this

Dave: how can we better attack the enemy

Mark: we could drive trucks into them

Jim: strap bombs to our chest and run at them

Dave: okay good how about something we haven’t tried before

Richard: ive got it we could use pepper spray to blind them!!

Dave, Jim, mark: GOD DAMMIT RICHARD FOR THE LAST TIME PEPPER SPRAY IS BANNED IN WAR WE CANT DO THAT

BasicLEDGrow: All weapons are made of chemicals.

Army0fMe: Well generally the point of war is to kill the other guy to achieve an objective, so less-than-lethal options aren’t really necessary or desirable.

On the same token, riot cops can’t exactly open fire on an unarmed crowd to get the survivors to disperse.

« TIL that in WWI trench guns were given to US soldiers skilled in trap shooting so they could shoot incoming grenades out of the air
TIL Thomas Jefferson believed Jesus’s teachings were “the most sublime and benevolent code of morals which has ever been offered to man,” but that they had been appropriated by his followers, resulting in a Bible that contained both “diamonds of wisdom” and the “dung” of ancient political agendas. »