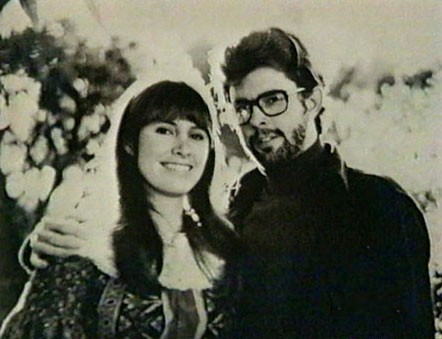 TooShiftyForYou: *“I felt we were partners, partners in the ranch, partners in our home, and we did these films together. I wasn’t a fifty per cent partner, but I felt I had something to bring to the table.” Marcia says, “I was the more emotional person who came from the heart, and George was the more intellectual and visual, and I thought that provided a nice balance.*

*“But George would never acknowledge that to me. I think he resented my criticisms, felt that all I ever did was put him down. In his mind, I always stayed the stupid Valley girl. He never felt I had any talent, he never felt I was very smart and he never gave me much credit.*

*“When we were finishing Jedi, George told me he thought I was a pretty good editor. In the sixteen years of our being together I think that was the only time he complimented me.”*

Marcia was also nominated for the Academy Award for Best Editing on American Graffiti. She has not had a single movie credit since Return of the Jedi in 1983.

thr33beggars: A fun tidbit in the article:

>Bonus: How she helped resolve Raiders

>Kaminski turned to Dale Pollock’s Skywalking: The Life and Films of George Lucas for this anecdote: “[Marcia] was instrumental in changing the ending of Raiders, in which Indiana delivers the ark to Washington. Marion is nowhere to be seen, presumably stranded on an island with a submarine and a lot of melted Nazis. Marcia watched the rough cut in silence and then leveled the boom. She said there was no emotional resolution to the ending, because the girl disappears. … Spielberg reshot the scene in downtown San Francisco, having Marion wait for Indiana on the steps on the government building. Marcia, once again, had come to the rescue.”

Maj391: When your wife wins an award for fixing your mistakes.

thxxx1337: Empire Strikes Back was the best one. Irvin Kershner, the director wouldn’t let him on set when filming.

Arkaega: George: “OK I have this idea called Star Wars.”

George: But I have so many ideas for how it should go.

Sinborn: This explains his contempt for the original version of the first movie. It’s like he had to redo it to remove her mark.

typodaemon: If something George Lucas was involved in is good you should assume that it’s because someone else heavily influenced it or was outright responsible for it.

The original trilogy turned out great because Lucas was completely un-established and he was forced to take input and ideas from others. The movies represent the collaborative vision of hundreds of people working together.

The prequels turned out awful because Lucas was such a big name that nobody could argue against his terrible ideas or suggest better ways to do things. These movies represent the vision of just one man.

wibblett: Every TIL about George Lucas just shows me that he didn’t really do much for Star Wars to succeed. It seems like he simply thought of the original story.

Syberz: I’ve always said that George is an amazing world builder, but a horrible storyteller.

cwmma: > Her first idea was to have Threepio get shot, and I said impossible because I wanted to start and end the film with the robots, I wanted the film to really be about the robots and have the theme be framework for the rest of the movie.

This is because Star Wars is, in many ways, a remake of the Akira Kurosawa film ‘Hidden Fortress’ but with the droids replacing servants in the original movie though it looks like maybe he had in mind an ending more like the one in Hidden Fortress which ended with the servants learning not to be greedy because the actual ending to Star Wars is shot for shot out of Nazi propaganda movie ‘Triumph of the Will’.

CrackedPepper86: Wasn’t he kicked of the Directors Guild for the decision to open the movie without credits? I don’t think you’re eligible for an academy award if that is the case.

mrthewhite: If the prequels proved anything, it’s what exactly Lucas is good at and what he’s not good at.

It really showed me what the other writers/directors/editors contribution to the original trilogy really meant to the movies so many of us grew up loving.

ShutterBun: For those who are so quick to dismiss George Lucas and hand the majority of the credit to his wife who worked for a couple of weeks on Star Wars, look no further than the “Escape from the Death Star” sequence from Star Wars.

And of course the climactic trench run was directly inspired by Dam Busters, so if anything, that’s where the credit belongs.

Say what you want about the prequels or his later misfires, but George was absolutely a brilliant editor in his own right.

ArrrGaming: I’d have loved for Obiwan to have survived the first movie.

Denihilist: Lucas had great ideas, but he also had problems with the proper execution of those ideas. I wish he had been an executive producer and let other people write and direct the movies.