Why does storing food by canning it make it last so much longer than any other method? 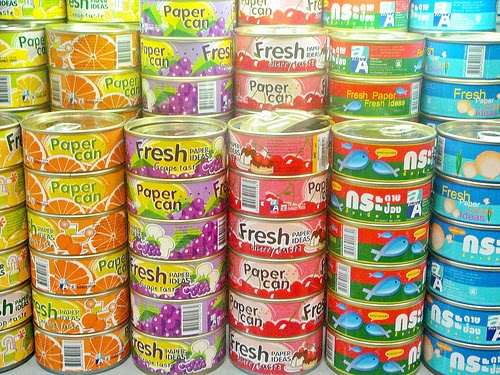 blipsman: After foods are sealed inside the can or jar, they are heated to a temperature that kills any bacteria inside. This preserves the food for an extremely long time.

anschauung: Food spoilage is mostly caused by bacteria and fungi in the environment.

There are a lot of them naturally present, and generally don’t harm the plant or animal that they’re living on. But when that organism dies, it literally becomes the Hunger Games.

The microbes start ripping apart the nutrients present in the dead organism, and creating environments that kill as many of their competitors as possible.

Some of that competition is good for humans: pickles, vinegar, cheese, bread, and plenty of other foods are basically just us picking the winner in those Hunger Games. We give the microbes we like (L. Planatorum, etc) a nudge that helps them kill their competitors that we don’t like (C. Botulinum, etc).

But, what does that have to do with canning?

Canning is the “kill everything” strategy. The food is completely sterilized and all microbes are killed. Good guys, bad guys, it doesn’t matter. Kill everything with fire (literally with fire, if you’re using gas heat). With everything dead, there’s no Hunger Games, and the food doesn’t get digested by them — it stays fresh forever.

If the strategy is to kill everything, you have to make sure that not one single microbe survives. That’s hard to do. C. Botulinum in particular is a tough little bastard, can kill you, and you’ve killed all the L. Mesenteroides and other “good guys” who might have fought against it. For that reason most commercial canned foods include some additional preservatives — the “chemicals” — that people complain about.

But those chemicals are important for the reasons I described. Canning tries to kill every last living thing in the food product, and if there’s a single survivor you’ll die eating it — a little chemical help makes sure that there are no survivors.

JPfromUSA: So there is bacteria everywhere right? This bacteria causes food to spoil. Once you put food in a can and create a hermetic seal (fancy term for saying nothing gets in or out, not even air), you have to cook the can. It is cooked in a giant pressure cooker with steam until all of the dangerous bacteria is killed off. The food will last as long as the seal. For a canned good, the seam is made of 5 layers of metal. When stored at room temperature, if the coating on the can is good, canned goods should last indefinitely, however there will be a small drop in quality after 2 to 3 years. Highly acidic products can eat through the can coating after a while, and have shorter shelf life as a result.

HerrDoktorLaser: Though canning (whether in cans or jars) can preserve some foods for a long while because canning typically sterilizes food, dehydration or other methods can be even more effective (consider the case of canned spaghetti).

As an aside, “best by” and “use by” dates often have nothing to do with how quickly the food will go bad. Instead, they’re often defined by how long the *packaging* can be expected to remain intact. This is why bottled water has an expiration date, for example, and why you can eat long-expired food so long as the packaging is still sealed.

Czekyoself: Moldy fact: Back in the day before exp dates and such- you would know a canned food was no longer safe to eat if the cans top or bottom lid had popped up.

ToasterFanclub: There’s 3 main ways of preserving food, all of which can be very effective.

The first, canning, focuses on killing all the bacteria in a product, then sealing it so no new bacteria can get in. Irradiation is another form of the same concept.

The second is altering the environment such that the bacteria there can’t grow. That can be by removing water, adding sugar or salt in large amounts, or otherwise making it inhospitable.

The final way is fermentation. The goal here is to stack the deck such that desirable organisms can outcompete the bad guys and prevent them from taking hold. Also, things like lactic acid (pickles) and alcohol (beer and wine) can help create an environment where other stuff can’t grow.

The very best ways of preserving things would likely be a combination of all three. For example, beer is boiled (type 1) with hops, which has some antimicrobial properties (type 2) fermented (type 3) then carefully sealed (type 1). A beer recovered from a shipwreck proved drinkable after 200 years.

RustBeltBandito: The food is sealed in air tight then they blast the cans with heat that usually kills bacteria.

whistleridge: Food spoils because bacteria eat it. Canning stops that in three ways. First, it uses heat to kill everything off during the canning process. Second, it usually stores the food in a brine solution that destroys any tiny amounts of bacteria that might have survived somehow. Third, it makes it impossible for other bacteria to get in.

Honey never goes bad, all on its own. Early European explorers in Egypt ate 3,000 year old honey from the tombs of ancient pharaohs.

r0botdevil: The canning process involves sealing food in a non-permeable container, then heating it to a temperature hot enough to kill any microbes inside. This essentially creates a sterile environment inside the container that should be maintained until the seal is broken.

Shubniggurat: It won’t, not necessarily. Vacuum sealing dried goods will preserve them for an incredibly long period of time, even longer if you put oxygen-absorbing and silica-gel packets in the sealed bag.

Part of the deal with canning is that you start by sterilizing the contents with heat and steam. Killing most of the bacteria, and then putting it in an airless chamber, significantly impedes the growth of the remaining bacteria. You could theoretically sterilize a steak with radiation, and then vacuum seal it in heavy mylar bags, and have it be preserved in much the same way as it would if you’d canned it.

Washuchan: The food it heated so that the bacteria that cause food to rot are killed and then it is sealed so that oxygen can not spoil the food or allow more bacteria to grow.

Seyss: So the canned food we eat is full of bacteria corpses?

Games_sans_frontiers: Bacteria need to breathe to multiply. They cannot multiply inside of the can because it is air tight. The food has also been processed to remove as much bacteria as possible before it goes in the can and sealed off so it takes a lot longer for bacteria to establish and spoil the food.

tofuonplate: The food spoilage usually comes from microorganism colonize into it. They can be on your hand, air, water, pretty much everywhere you could think of. Canned food are sterilized first then heated inside to reduce the number of microorganisms.

Now, home-canned foods are very different. If you don’t properly sterilize the container before sealing, you could easily contaminte the food inside of container and allows to grow massively. If your neighbor offers you a home-canned food, calmly decline the offer…

TheThruster24: Canning really isn’t that great of a method, if your goal is to keep food for as long as possible, freeze drying or dehydrating food is absolutely the method to go with.

There are dehydrated meals prepared for the war in Vietnam that you can add water to, cook, and eat today without any issues. The canned portion of these meals is usually compromised.

Type of food helps as well, a guy on youtube has eaten a cracker from the American Civil War.

Trickledowntheory: Does anyone know if heating the metal causes chemicals go trickle into the food (and cause any side effects)?

TigerSkinMoon: Theres no legal reason for an expiration date on vacuum sealed cans therefore the only reason theyre there is for economics. If theres a date it has to be “used by” then either you use them or throw them away to get new ones. You spend money on more of something that had no reason to be thrown away. And the foods that dont last arent actually vacuum sealed. Thats what makes the food go bad. Can dont have microholes. Plastic does.

LakeButter: There are little microscopic bacteria that protect the food with ultraviolet ray beam guns. They wait for the perfect time to kill the bacteria after the can is sealed. Once the can is opened, the bacteria eject out of the can and find there way back to the wild, where they are collected again by scientists. It’s kinda like natural recycling. The more you know.

sniper459: A lack of oxygen stops it from rotting. It will eventually but over a longer period of time.

Think about that. The oxygen in H2O causes an oxidation on metal. Go to a hot country and cars won’t rush so fast due to last water.

larrydocsportello: Canning kills germs and then preservatives to keep the food “fresh”.

ELYoure5: closing food into a box with no key or any way to open the lock kills anything since they cant breathe but the food. the food also has a few buddies that keep it alright.

« ELI5: How did drinking beer help out during the time of the bubonic plague pandemics?
ELI5: How does chapstick work? »