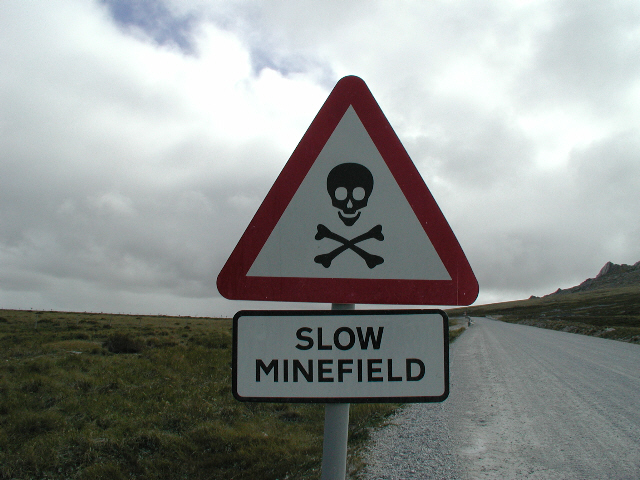 Just saw a thread about the Korean DMZ at winter with several meters of snow and thought of this.

Bonus question for the physics people. Snow is filling a lot of space, and filled with water and air of course. Would you be able to safely walk across a minefield if it was covered in 4+ meters of snow? You displace your weight over a large area possible lowering your weight below sensitivity. But if it should explode would you be fatally harmed, since a lot of force would be dispersed through the snow.

Not_Legal_Advice_Pod: It depends completely on the design of the mine. The simplest mine you can imagine just has a trigger weight. 20 pounds say. Your question then becomes “If I put 20 pounds of snow on top of that will it go off?” Yes it will. If you ask “if i put 15 pounds of snow on it then a person walks over will it go off?” the answer is again yes even if a footstep is distributed down to only 5 pounds on the mine. If your question is “is there some amount of snow that will spread out enough weight of the person not to set off the mine?” The answer is completely dependent on the trigger weight of the mine.

Now… that said. I think on the DMZ the kind of mine you need to use is a bit more sophisticated. I know nothing about mines but I do know that in korea in the winter the ground can freeze. When things freeze, they squeeze. Thus, to avoid being set off I imagine a landmine need to measure the rate of change of weight on it as opposed to the actual weight on it. And that would really help avoid going off in the event you were walking over it when it was covered by a very thick layer of snow.

rhomboidus: Even a few meters of snow isn’t heavy enough to trigger most landmines. Though mine fields due tend to suffer attrition over time due to things like bad weather, landslides, fires, etc. and need to be constantly maintained.

richardtheassassin: The mines are designed for the pressure of a human foot stepping on them, or a tank rolling over them, depending on the type of mine.

For the same reason, APOPO’s rats (a Reddit favorite topic a few years ago) don’t set off landmines when they go scurrying over terrain trying to sniff out mine locations.

Petwins: Snow is not very heavy and landmines aren’t that sensitive. They are rated to explode for people/vehicles, but you don’t want your minefield revealed because a mouse decided to run across it.

So its fine (sadly I guess)

BlueFalconPunch: it all comes down to the type of fuse and/or the mine itself.

if its a [tiltrod trigger](https://en.wikipedia.org/wiki/Tilt-rod_fuze) than yes, snow could potentially set it off by shifting it more than 20 degrees out of center.

if its a [tripwire](https://en.wikipedia.org/wiki/S-mine) attached to an M16A2 or “Bouncing Betty” the snow will pile up and just cover the wire and it wouldn’t build up enough weight to set it off.

its its the typical [pressure fuse](https://en.wikipedia.org/wiki/M15_mine) on an M15 then the snow would have to build up enough weight directly on the pressure plate, added bonus some of the early fuses used a liquid filled ampule akin to a chemlight…and it would freeze. The new fused need something like 300lbs to go off.

As far as walking over snow…if the snow was thick enough and displaced enough of your weight, then yes it “Could” be safe. Cold isn’t great for mines but it doesn’t stop them. Mines are very dangerous but also oddly specific in the triggering. If a [toe popper](https://www.youtube.com/watch?v=P0JSpQyL5VY) goes off under 4 meters of snow you would probably barely hear it.

tommifx: Bonus question: why do minefields not become forests? Like I would not like to be the guy to cut the grass there.

Two2na: I’ll take a crack at this.

Pressure at the surface of a structure (think road, sidewalk, or in this case snow & ground) extends downwards, generally in a spherical/elliptical pattern beneath the point of contact. In the case of snow on a minefield, if you consider the point directly over a mine, there is pressure from the weight of snow acting directly down onto the mine. However, some of that pressure is also exerted laterally to the soil particles around the mine. At the same time, the weight of snow around the mine would exert a similar lateral pressure. The result is that some of the weight of snow would “cancel out” with respect to the mine. Think about pushing a stick into the top of a pile of sand compared to pushing it into a bucket of sand – it’s easier to push into the pile of sand.

For your bonus question, it’s tough to say without more details. Theoretically, a deep enough snow layer could prevent it from triggering.

Pitarou: A quick and dirty answer, based on nothing but high school Physics.

I did the Math for a [PM-1 antipersonnel mine](https://en.m.wikipedia.org/wiki/PMN_mine).

Height of a column of water needed to trigger the mine:

(Don’t forget that snow is mostly air, so 0.59 m of precipitation would be several metres of snow.)

Looking at [a climate graph for Seoul](https://en.climate-data.org/location/718563/), which isn’t too far from the DMZ, we see that winters are pretty dry, so there’s unlikely to be anything like that much precipitation.

As for your question about walking over a minefield. The snow will distribute the walker’s weight, so the mine will feel less pressure from the walker. But if you’re unlucky, that slight pressure increase, in combination with the weight of the snow, might be enough to trigger the mine. I wouldn’t chance it.

DarthSeraph: For your bonus question, it depends on the sensatibity and size of the mine. Mines vary widely in what can trigger them, what they are made of, and their function. It would also depend on how compact the snow is. If the snow is densely packed and its a small antipersonnel mine the distance and snow could definetly save your life from the explosion.

The most important factor that determines whether you die is your distance to the explosion. 4 meters is a good distance for a small explosive. A common grenade generally has a kill radius of 5 meters. So with the 4 meter distance and enough snow to absorb some of the blast there is a chance.

Like I said previously, it depends. Its also possible to set off an anti tank mine that’s had its parts wearing out for the past 50 years and you are the unlikely bloke that moved the grain of sand that kept it from functioning.

« TIL on 9/11, despite security telling people to stay, Aon executives began evacuating their employees and thus saved 924 lives.
ELI5: When food goes stale, does it also become less nutricious? »