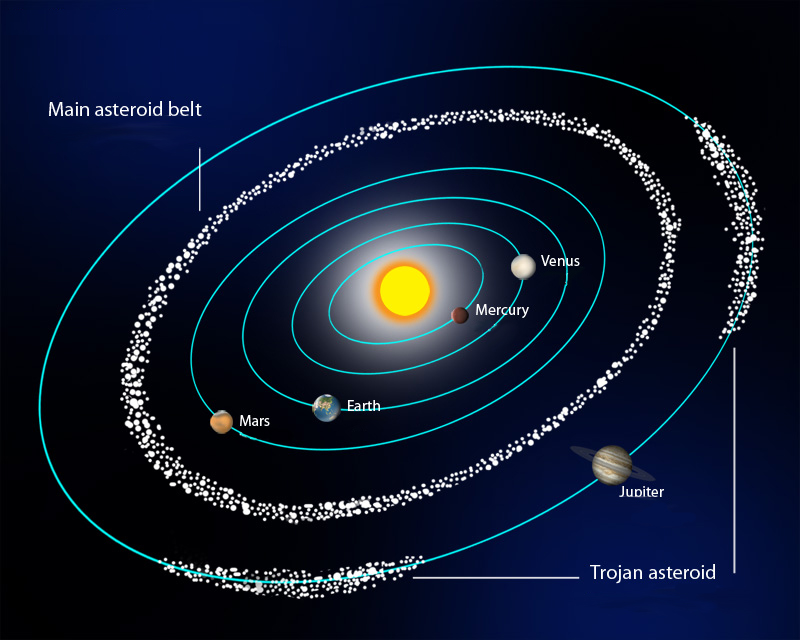 JimBob3s1: Its trying to, daily. But there’s a problem. Jupiter is big. Like very big and therefore has a massive gravitational field. So whenever a group of asteroids start to come together Jupiter comes in and yoinks them apart. Along with the sun keeping them in orbit around it they don’t really have an option but to stay in a belt until Jupiter stops being so greedy with its gravity well.

If u were wondering, the same thing happens with Saturn, sort of. The gravitational pull of Saturn means that the asteroids in its rings can’t clump together as they are ripped apart by Saturn’s gravity

juantxorena: The asteroid belt is mostly empty. The asteroids are hundreds of thousands of kilometers apart, and it’s quite wide, like 300 millions km if I recall correctly. The combined mass of all the stuff would be around 4% of the mass of the moon, which is quite low. For example Ceres, the asteroid-dwarf planet has around one third of the mass of the belt.

With so little mass in such a big space, it would take billions of years for it to start collisioning and make bigger and bigger chunks until you have a dwarf planet, IF it was left to its own devices. But in addition to the little mass it has, the belt is quite close to Jupiter, whose gravity is strong enough to disturb the orbits of the asteroids and “shepherd” them, which completely prevents the formation of a planet or something there.

Revenge_of_the_User: I think its less of a problem with Planets getting in the way, and more a problem of the reality being: asteroid belts are extremely spread out. On such huge scales that we use to look at them and how theyre shown in movies is completely unrealistic.

Being so small and so far apart, they dont have the individual gravity necessary to begin forming a center, and so can’t form a protoplanet.

teknokryptik: There is literally not enough stuff in the asteroid belt to form a rocky planet.

To accumulate you need gravity to do it’s thing, but with so little material there’s no attraction, and all the fluff in the belt is so far apart anyway that it’ll never happen.

I think all the material in the belt amounts to little more than our moon (I’m probably wrong on this exact point but you get the point).

I hope that the basics. It’s literally because there’s basically nothing out there.

Bizmuth42: I am no astrologist, but the 2 biggest factors IMHO is distance between adjacent asteroids, they are not as close as movies make it seem. And time, in that they might eventually, but it would take millions+ of years

« ELI5: Why is it important to do stretches before exercising (i.e. pull-ups, push-ups, weightlifting, etc)?
TIL that most Americans aren’t aware of blackcurrant flavour (one of the most popular soft drink and confection flavours in the world) due to a ban on the plant in the 1900s because of its role in spreading disease among white pines, a principle industry of the growing American republic. »