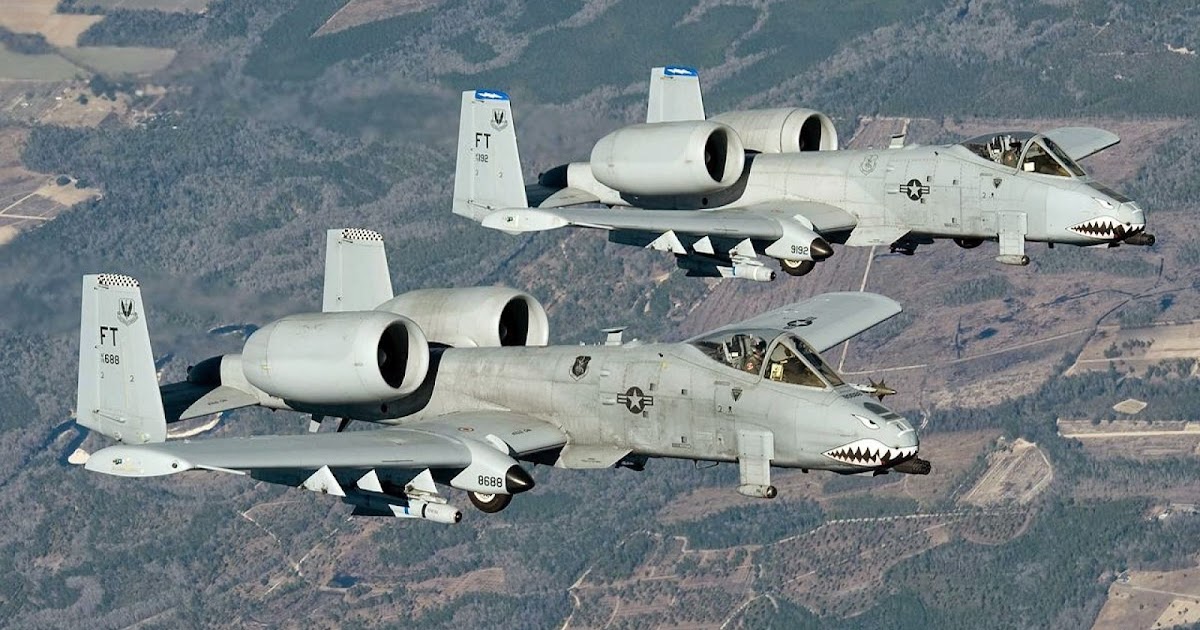 mauirixxx: my favorite quote about the A-10 vs the F-16 in terms of it’s ability to loiter and generally f— shit up:

>It’s not just about size of targets. The F-16 is better for “get-in-get-out” while the A-10 is a lot better for “Fuck you, I think I’m going to stick around a while.”

>When you want to kill things for several consecutive minutes the A-10 is the better choice.

come_back_with_me: Some planes have guns on them. Some guns have a plane on them.

1776cookies: I’ll be run over, (rightfully so) by more informed people, but from what I remember from the Iraq war, the Warthog surprised everyone, and Warthogs could just fuck up anything up they wanted. Maneuverable, reasonably armored, and equipped with Thor’s Hammer being thrown up to 4,200 times a minute.

Enough to make sure you had your Wheaties that day.

bigredcar: Electronics on the A-10 have much more punishing testing to survive vibration and shock because of this. Source – I’m an avionics engineer

Razoredgeknife: The A10 is essentially a gun that they built a plane around.

es1426: Forgot to add. It produces more power than each of its main engines!

ThePlanesGuy: For those interested, the **A-10 Thunderbolt II** is a single single seated, twin engine aircraft designed in the early 1970s by Fairchild Republic solely for the assistance of ground units such as close air support and forward air control. It is employed exclusively by the United States Air Force. All A-10 variants are equipped with a 30mm GAU-8 Avenger Rotary Cannon that fires 4,200 Depleted Uranium, armor piercing rounds per minute. Standard armament on an A-10 can include 2 AIM-9 Sidewinder missiles for air-to-air self defense, 6 AGM-65 air-to-surface Maverick missiles, 70/127 mm rocket pods, and an assorted array of unguided to laser guided bombs (loadout varies by mission).

The A-10 is designed with deliberate redundancies as precautionary measures that ensure reliability. It has double-redundant hydraulic flight systems, and a mechanical system as a back up if hydraulics are lost. Flight without hydraulic power uses the manual reversion control system; pitch and yaw control engages automatically, roll control is pilot-selected. In manual reversion mode, the A-10 is sufficiently controllable under favorable conditions to return to base, though control forces are greater than normal. The aircraft is designed to fly with one engine, one tail, one elevator, and half of one wing missing. The A-10 is exceptionally tough, being able to survive direct hits from armor-piercing and high-explosive projectiles up to 23 mm. The cockpit and parts of the flight-control system are protected by 1,200 lb (540 kg) of titanium aircraft armor, referred to as a “bathtub”. The armor has been tested to withstand strikes from 23 mm cannon fire and some strikes from 57 mm rounds.

The A-10 Thunderbolt is extremely popular with ground forces due to it’s effective role as a “tank killer”. It’s Avenger Rotary Cannon is exceptionally adept at neutralizing vehicles due to a combination of heavy Depleted Uranium and rapid fire capabilities. The Avenger Cannon fires rounds with such force, that early test firings of the cannon put A-10s into a stall. The reputation of this cannon, combined with a number of specialized weaponry and impressive specifications have made the A-10 revered by its allies and feared by enemy forces. I’ve even heard reports from the Yugoslav wars of enemy tanks that were advancing moments ago fleeing at the mere sight of a singular A-10.

Despite its reputation, the USAF has repeatedly made plans to scrap the A-10 in favor of the, according to ground forces, less favorable F-35. the USAF has argued that the F-35’s high performance and technological prowess make it a perfect candidate to succeed the A-10. The US Army and Marine Corps argue that the A-10’s reliance on a lower speed and hands-on operation encourage precision of targeting and high lethality. They also point out that a fire-and-forget tactic common in the F-35’s use does not allow for a quick return to the combat area should air support be needed again due to a changing battlefield.

dirtyrango: I read that the plane was basically built on the weapon system. It’s not so much a plane with a gun, it’s a gun with wings.

tickleyourfrontbutt: It also manages to convey the feeling of being totally “fucked” in every conceivable language by anyone who has been on the receiving end of one.

whatdidyoujustsaybro: Fact: If you hear the A10’s gun firing, it wasn’t aimed at you

lagoon83: Why “Warthog”? I think it looks more like a Puma.

TheSplits72: Their current advantage in modern US doctrine is that they’re much cheaper per flight hour than any other aircraft suited for the role in current service, which makes them an excellent choice for having on call CAS. Especially when fighting unarmored insurgents that don’t have access to anti-air capabilities.

The only way we could fulfill that requirement for less money would be with a prop aircraft like the Super Tucano, which still doesn’t bring the brrrrrrt.

The recoil is about 45kN. There’s some good info under Recoil on Wikipedia.

While that certainly is a lot of force, I’m not sure if it’s continuous enough to act like a propulsion system with a full 45kN. I’ll leave that up to a physicist.

Npr31: Work in ATC and had one arrive a few years ago. Someone remarked that it was slow over the RT. Pilot came back with “we were designed to fly through the fight, not away from it”

tydalt: Late to the party, but here is an[ Imgur album of facts and photos](https://imgur.com/gallery/y08jM) I found once… cool stuff…

the_dj_zig: I mean, it’s not for nothing that they designed the A-10 with its front landing gear offset, in order to have the cannon aligned with the center axis of the plane.

DancinginAshes: In 1997 I was building a live fire range on an Air Force base. We were building it up on a plateau that overlooked a river floodplain, with another live fire range about 2km away along the river bottom.

One day we look up from our carpentry work to the sound of jet engines. Two pairs of A-10s were doing their mandatory weapons cold passes to get eyes on their firing range to make sure the range was clear. After two passes, they climbed and headed out.

A few minutes later the first two come screaming down in a dive with the sun at their backs, moving very fast. And then you see the smoke and flames and a stream of shell casing raining down from the aircraft. A split second later you hear that distinctive BRRRRRRRRRRRTTTTTTT sound, and see the dirt geysers erupt in and around the target cars that made up the range.

It was very impressive, but the most surprising thing to us was seeing the A-10 looking like it was slamming on the brakes when the gun fired, followed by instant acceleration when they let off the trigger. We had no idea they did that.

Over the course of our 1 week building project, we got to see the A-10s lighting up their range a total of 3 times.

pablo_the_bear: Could the guns be mounted to fire backward so that they’d help with propulsion?

Sabot15: If you point any gun backwards, parts of you are going to fly.