Captain-Tripps: Also, no one served jail time and it was the first time in American history that they used air planes to bomb other Americans.

IronicMetamodernism: What an amazing but horrible story.

The police went from protecting a young black suspect from a lynch mob to dropping firebombs from planes onto black housing. In the side of three days.

> Numerous eyewitnesses described airplanes carrying white assailants, who fired rifles and dropped firebombs on buildings, homes, and fleeing families. The planes, possibly including six biplane two-seater trainers left over from World War I as well as other privately-owned aircraft, were dispatched from the nearby Curtiss-Southwest Field outside Tulsa.[1][23] Law enforcement officials later stated that the planes were to provide reconnaissance and protect against a “Negro uprising”.[23] Law enforcement personnel were thought to be aboard at least some flights

Insane that this was only a little under 100 years ago.

TooShiftyForYou: *Many survivors left Tulsa. Both black and white residents who stayed in the city were silent for decades about the terror, violence, and losses of this event. The riot was largely omitted from local and state, as well as national, histories: The Tulsa race riot of 1921 was rarely mentioned in history books, classrooms or even in private. Blacks and whites alike grew into middle age unaware of what had taken place.*

You know a fight is shameful when neither side wants to ever discuss it again.

bjb406: I think the worst part is the 6000 black citizens being arrested. For having their homes destroyed and friends/family killed.

ShroomDo0m: I am from Tulsa, the place this happened. Tulsa schools strongly misrepresent just how awful this was and devote little time to covering it. The city even built a highway that serves as a wall separating the African American north Tulsa community from the rest of the city. Very little effort is done on the cities part in taking care of north Tulsa. They struggle to even get a grocery store whereas parts of the white midtown have multiple grocery stores within a couple blocks. Segregation and racism are still alive and well in this city despite efforts to hide this

an_imperfect_lady: Having read the wiki page, it’s interesting that the cops tried to keep it low key, the lawyers involved stuck up for the boy, the girl herself said she wouldn’t press charges… everything was under control till the press got hold of it and started blasting sensationalist headlines that brought two mobs, one black and one white, to the police station.

addpulp: I EXPECT THESE COMMENTS NOT TO BE AWFUL AT ALL

clerk1o1: I’ve never fucking heard of this. This is crazy and would make for a crazy miniseries. Like 6 episodes on HBO just going through everything.

ChrisLipski: It isn’t taught as part of Oklahoma History in high school. It is still decently unknown to locals.

GregBahm: The context of the event always made it seem like more of a anti-black pogrom than anything else. I feel like whoever stylized this event as “race riot” should be given some kind of award for clever marketing.

When people hear “race riot” they picture a bunch of belligerent black people flipping cars and smashing windows. They don’t picture a white guy getting into a plane and flying over a really nice neighborhood and bombing it.

theology_: This is probably going to get buried, but I lead the movement #RememberBlackWallStreet. One of the goals of the movement is to get the event acknowledged in history books. To show your support please spread awareness on social media

To find out more about the #RememberBlackWallStreet movement, please visit http://www.africanawiki.org.

Edit: thanks guys, here is the promotional image for the movement: https://imgur.com/a/y3dSR 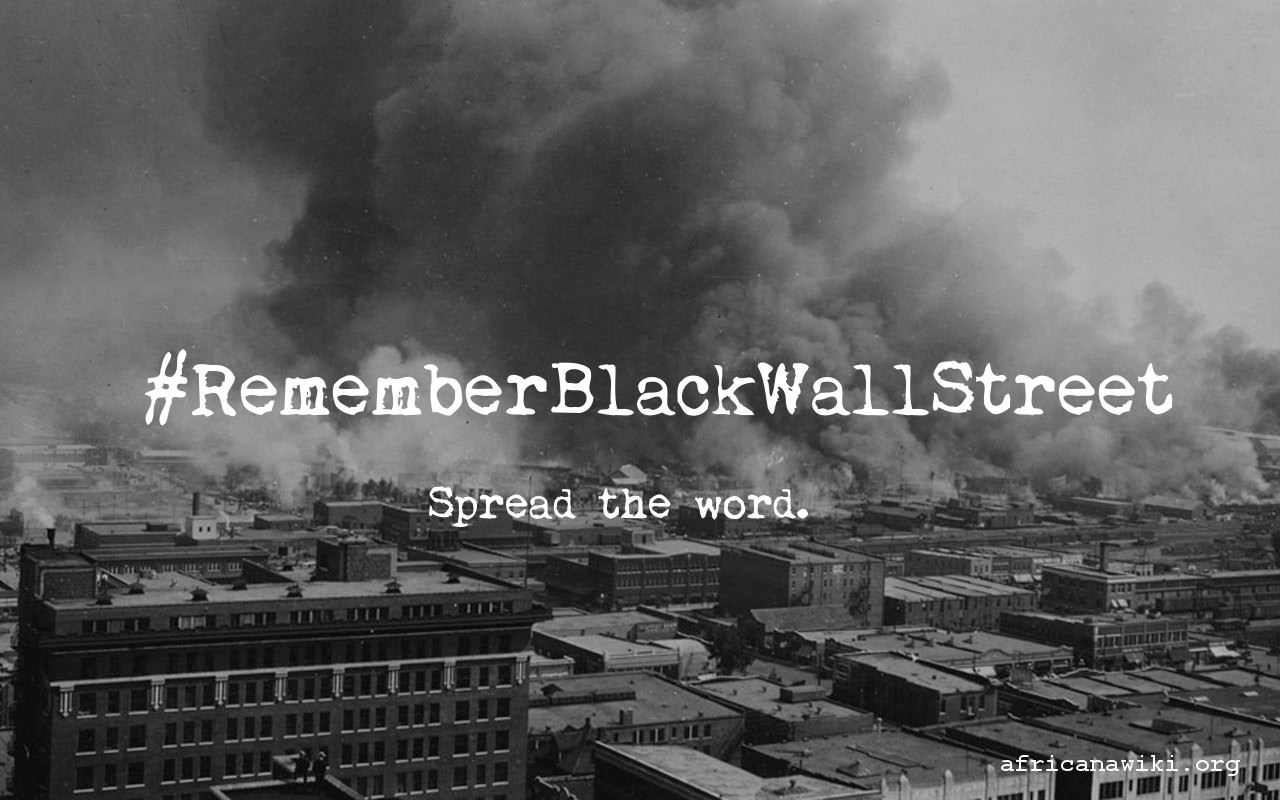 nerdgirl37: Oklahoma also does a pretty good job of not talking about the riots or at least they used to. I remember when I took Oklahoma history it got maybe a half page in the textbook and most people had never heard about it before. I grew up roughly an hour and a half from Tulsa so it wasn’t like it was halfway around the world from us.

illtryitt: I live in Tulsa. I despise the name “Tulsa Race Riot” because this was a planned massacre. It was a set up — read the oklahoma governor’s literature on it. He admits this was set up by the Tulsa government with the white mob. It should be called the Greenwood Massacre. Afterwards, Tulsa set up three concentration camps downtown where black Tulsans were held until white citizens would vouch for them. This isn’t taught in most schools. There is a lot the wikipedia article doesn’t say. The newspaper articles from 1921 are cut out of the archives in the libraries here so even if you want to read about it you can’t. The archives are closed from public consumption and you can’t request them because “there are too many requests”. Many Tulsans don’t know nor understand the history. The most quietly racist place I have ever lived.

Goldving: If your interest is piqued, [The Night Tulsa Burned](https://youtu.be/LD3aw4-RJpE) is a good documentary about this.

Captroop: I’m working on a screenplay about this story now. It’s such a traumatic event in the ancient Greek tragedy sense. Especially when you figure many, many of the founders and inhabitants of Black Wall Street were WWI veterans. They risked their lives in segregated units because they believed in the promise of the American dream only to have the fruits of their sacrifice burned to the ground.

Clash_Tofar: Growing up in Tulsa, they teach us about this in school and try to use it as a reminder of why mistrust can still exists many generations later.

Fresh2Deaf: But “Pull yourself up by the bootstraps!” “Stop blaming your situation on the past!”

And people still can’t understand why the black community is so disenfranchised when shit like this happened and continued to happen over the last 100 years. Sad, sad shit in the annals of the “greatest country in the world”.

silentwalkaway: You can see photos and read about it at the Tulsa Historical Society website. If you’re in the Tulsa area, they have a permanent exibit set up about the Tulsa Race Riot and Black Wallstreet.

Skeith_Hikaru: You know racism* aside, what kind of god damn idiots kill 300 people over a single rape/assault?

EDIT: TIL reddit doesn’t understand rhetorical questions meant to call attention to the fact that racism is the reason such extreme escalation of violence happened here. Check out U/interfail ‘s comment.

> You’re right, if you put racism aside it makes no sense. Which is why that’s a dumb thing to do.

MadMaxMercer: Why the fuck are there so many weird ass comments in here?

LegendaryFalcon: > Afterward, Page told the police that she would not press charges.

All the killing and looting for nothing.

ben1204: It’s pretty unbelievable I had never heard of this. It’s pretty unreal that there are people who expect the African-American community to pull itself by the bootstraps when shit like this happened less than a century ago.

dimebag42018750: The effects are still felt today in tulsa. We are one of the most segregated and racist communities.

sciencesalmon: This is a shameful piece of Tulsa’s history. The Greenwood district is just barely limping by today, nearly 100 years later. All because a bunch of white people didn’t like black people being successful and gettin all uppity.

theboss6212: This sounds a lot like the Black Spot massacre from “IT.” I would like to know if King drew elements of his story from this.

MasterBet: Blacks have really suffered in America..a shame they are still suffering and and movement they start to prevent more suffering is mocked

Zeronee: I live in Tulsa and was talking about this with an older Uber driver. The whole story about it starting with one sole individual in an elevator can be the perfect cover up for some oil magnate that wanted to get rid of some debts with people in the “Black Wall Street”, think about it. Tulsa was booming with oil at the time and at the time racism was much more prominent. Someone made business and wanted to get rid of what they owed.

jrm2007: I have said it before: The way Blacks were treated in the United States is related to the Holocaust. Jews could not expect real outrage at their treatment in Germany given that things like this happened in the USA to Blacks. In fact, perhaps things like this did not go unnoticed elsewhere and gave the nazis encouragement; I know after the fact, when for example Goering was on trial, he mentioned while probably not this specific incident the treatment of Blacks as justification for what had been done to Jews or at least a mitigating factor.

Waleis: It wasn’t a riot. It was a pogrom.

Roslindros: Never heard this in school…

OwliC: As a Tulsa native it’s sad that they don’t teach this history much in schools. It’s kind of ignored.

PirateLiver: “boy… That escalated quickly. I mean, that really got out of hand fast.”

McLurkleton: I was sure this post would be locked by now, pleasantly surprised.

bigde32: Its crazy that they never teach these kinds of things in school. They try to cover up events like this up and act like it didn’t happen.

SilentImplosion: How many other incidents like this have we swept under the rug?

fuzzyasspeaches: Grew up in Tulsa. Can confirm it is mostly glossed over in history books. Sad that many don’t know about this even in our own communities

J0RDM0N: I grew up in Tulsa and i didnt year about this until after I graduated, what the actual fuck why wasn’t this ever talked about in school

altiuscitiusfortius: Just FYI, the title gets it wrong. It was known as “Negro Wall Street” and probably also “Nigger Wall Street” in the 20s by people who lived there and talked about. They changed the name to Black Wall Street for history books.

MichaelASand12: This is just one small fraction. Anytime blacks are doing better than whites it’ll be ruined. Certain people just cannot function around others without causing harm.

prairiebean: My family all moved to the Tulsa area 20 years ago, after I left for college, but I just learned about Black Wall Street last year on Twitter. (Surreal and sad.) This month, I was back to visit and went to see the memorial. The area, Greenwood District, is much smaller than it was then. There’s a memorial on the street, a reconciliation park that opened in 2009, and the Greenwood Cultural Center has a small museum inside (closed weekends, when we were there).

macadon1914: I think the fact that stuff like this goes largely untaught in a lot of educational curriculumsis is interesting in the context of how so many of a certain group of folks tend to be so quick to assert the whole “well, black folks should just pull themselves up by the bootstraps – there’s nothing stopping them from having it all, they just don’t wanna work!” viewpoint…but it seems like when they were trying to collectively build wealth and do that very thing, this is the kinda stuff that happened. So disingenuous.

Shaq sees everything from up there

« TIL of Regulatory Capture, when a governmental regulatory agency ceases to promote the interest of the public, but instead does the exact opposite by advancing the commercial or political concerns of special interest groups that dominate the industry or sector it is charged with regulating.
ELI5: What was the Old Fashioned cocktail called before it was old enough to be old fashioned? »