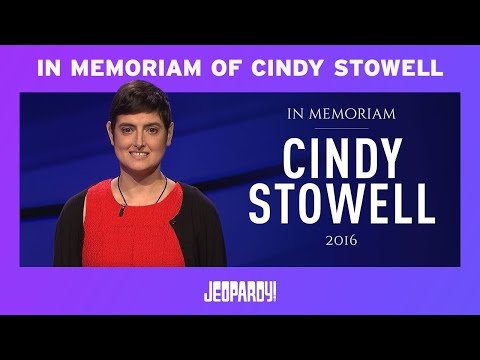 >Six-time champion Cindy Stowell competed on Jeopardy! with a singular goal in mind: to donate her prize money to cancer-related organizations. When she taped her episodes in August and September of this year, she had Stage 4 cancer, and she lost her battle with the disease on December 5, eight days before her first episode aired.

>Cindy won her first game, unseating reigning seven-game champ Tim Aten and claiming $22,801, then went on to win the remaining three games that day. She returned to Austin for a short break before the next tape session on September 13, when she won two more games and brought her final total to $103,801.

>When Cindy was in the hospital, Jeopardy! sent her advance copies of her first three episodes, so she and her family were able to watch her realize a lifelong dream of competing on the show. Jeopardy! also expedited Cindy’s prize money, and she received and acknowledged it before she passed.

>“Cindy came on the show with a mission. We gave her the opportunity to fulfill that mission and she made the most of it,” said Jeopardy! executive producer Harry Friedman.

>Everyone at Jeopardy! expresses their deepest condolences to her family and friends.

CrimsonPig: In the most recent Tournament of Champions, [Alex and the contestants all wore blue ribbons in her memory.](https://pmctvline2.files.wordpress.com/2017/10/jeopardy-tournament-of-champions-2017.jpg?w=620)

alwaysjammin: I waited on this woman almost every Saturday at Geeks who Drink. RIP Cindy.

RememberWolf359: I remember watching her and reading that she had died about after three or four victories. It was sad. She was a fine champion.

rekabis: I think the right thing to do would have been for Jeopardy/NBC to match her donation.

thepicklejarmurders: The SO of my favorite author was one of the challenging contestants in one episode. I believe Cindy was running a high fever at the time but still mopped the floor with the other two contestants.

Landlubber77: I read on some TV blog that she died right before her episodes aired, so I intentionally talked her up and got all sentimental about rooting for her while watching her episodes with my wife. Then during her last episode I turned to my wife and said “this chick has actually been dead since before you even knew she existed.”

I watched that information hit like an atom bomb and saw my wife go into a full on existential crisis in the matter of seconds.

It was not nice.

Thatonedude25: At least she died doing living out her dream. RIP

Brieflydexter: I remember those episodes. I think they moved up her dates to make sure she could play.

pistonian: it feels so pathetic to just click the up button for this one

VividMelody: What a shitty thread. The post is trying to celebrate someone living their dream and people here decided to make it about personal vendettas.

chbailey442013: ITT people bitching about charties without acknowledging how powerful of a story this lady had. Damn I hate people.

Dappershire: I’m not going to look into her before judging, and its great she donated to a cause, but was her family rich?

I’m just saying that 103 thousand dollars doesn’t go all that far for cancer research (not that I trust half the cancer orgs out there), but it could relieve alot of secondary death stress for the family. Bills taken care of while people stop working due to grief. Hospitals paid back for their thousand dollar a piece aspirin pills. a funeral covered allowing children to actually say goodbye. Take out, until someone else learns how to cook those dinners.

I’m selfish, I know. But I’d definitely have saved that cash for my family.

Thestonerofnarnia: I think the sad part is that a significant portion of her donation probably went straight to the pockets of pharma pig executives who are responsible for stalling oncology progress because sick people is money

nicky1088: You know what’s sad? That pays for less that one person. My dad has pancreatic cancer, and every cancer hospital has given up on him so he has to go do experimental stuff and trials, which are around $80k each

MorGlaKil: As nice as it sounds, unless she was really picky about where the money went, most of that money probably didn’t go towards curing/treating cancer. I say this because most of the time, especially donating to non-profits, only a small percentage of the cash actually makes it through to the people doing the actual work.

viverator: So nice of her to give 60-80% of her winnings to “administration overheads”

kankrejalaska: Imagine beating this young cancer lady, and getting her kicked off the show! It’d be mean to do, but she deserves it for trying to compete with me.

LeeTheNPC: Of course she won, nobody would want to beat a terminal cancer patient.