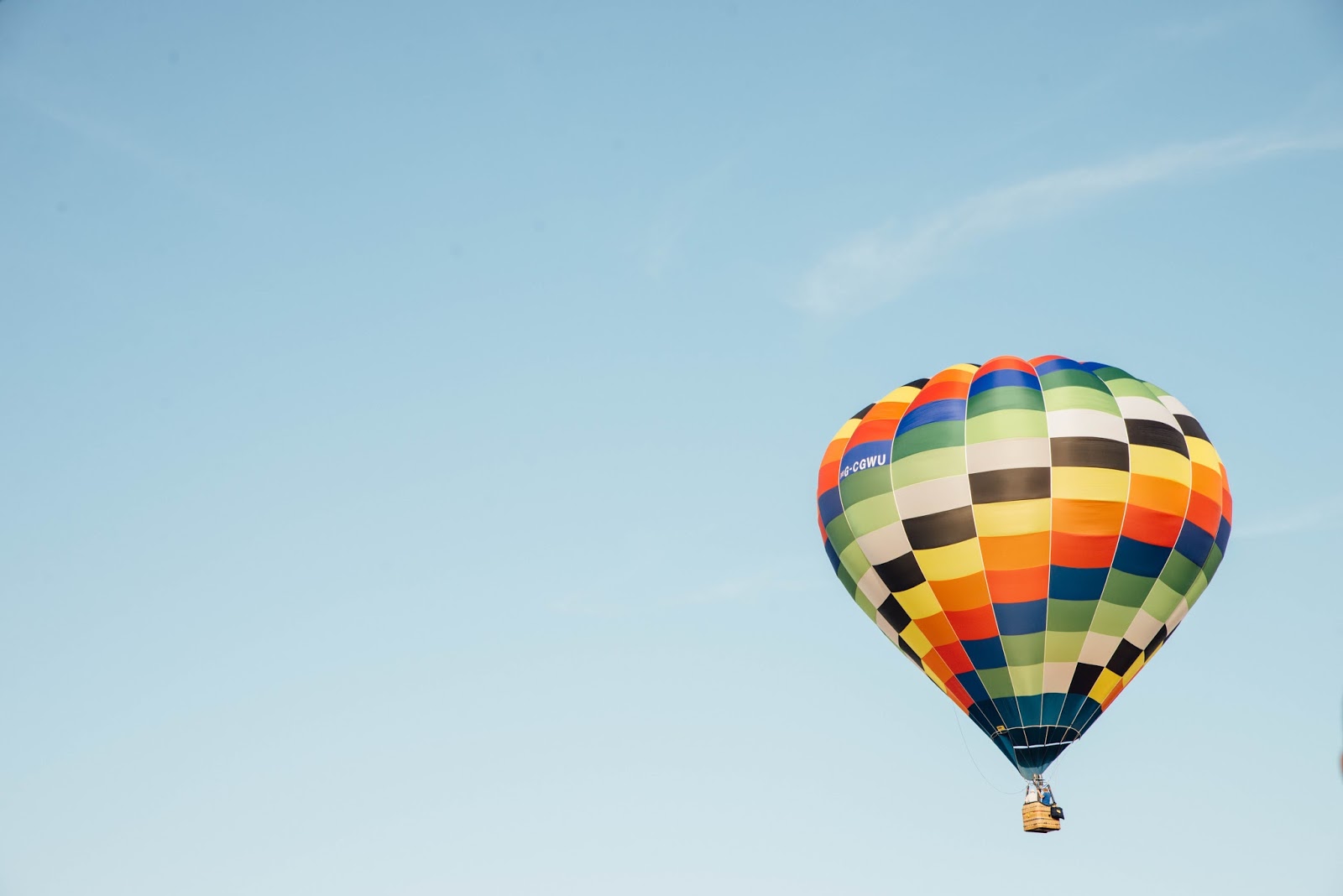 enjoyoutdoors: Controlling a hot air ballon is a lot of guesswork. Educated guesswork, but guesswork nonetheless.

By controlling the heat inside the actual ballon (this is done using gas burners) it’s possible to control if the ballon is rising (because it’s hotter than the surrounding air) or declining (because it’s colder, respectively.).

The ballon also has a valve at the top where you can let hot air out, to speed up the process of cooling down.

Actual navigation, though, takes skill. A ballon is always and indefinitely moving in the direction the wind is blowing. Which means that if you want to go west, you’ll have to wait until you have wind blowing towards the west.

Complicating things a bit, wind can blow in different directions at different heights. Which means that you can go higher and find a patch of wind going in sort of the right direction instead of staying low and going in the exact opposite direction.

The easiest way to find out exactly how the wind is blowing above you is to release a small helium ballon (because helium ballons always go up) and see in which direction it goes when the wind grabs hold of it.

The rest is all about skill. Knowledge. A tour ballon pilot would typically have several pre-planned routes to choose from depending on wind direction. “If the wind is blowing westward, we’ll have to start east of the national park with all the wild animals. And land someplace west of it.” The problem is the “someplace” bit, because you don’t necessarily end up where you intended to.

Most aircraft can fend for themselves and force a direction they want with a propeller, but an air ballon just…can’t. So, to simplify things for everyone, air ballons got their own set of aviation rules where other aircraft has to make way for them. The obvious issue here is of course that ballons are not necessarily welcome in any airspace, because the extra considerations everyone else has to make for them.

Things that typically go wrong is that the wind changes at the exact worst thinkable time, pushing the ballon towards a high voltage power line. Or, you know, towards a forest. Or a cliffside. Any place where you can’t immediately land is a risk that the pilot would try to avoid. Passing a risk area means that they have to plan ahead.

When all you can control is height, you’ll have to go higher. Because if you can only go up, then you are soon out of options. But if you can also go down, then you got two options to choose from.

jimthesoundman: Definitely not an expert, but I think the pilot just has to raise and lower the craft until he finds a crosswind that takes him the (general) direction he wants to go. I’m sure there are times when that can’t be accomplished at all, so they just go with the flow and see where it takes them. As long as they don’t hit a power line or get blown out to sea, it’s probably all good with them.

Haurian: Hot air is less dense than cold air. A balloon full of hot air produces lift than can carry the basket and its contents

They’re pretty much at the mercy of the wind. A rough idea of their direction can be found by checking weather reports before flying.

However, the one thing the pilot can control is his height. By changing how much and how often he uses the burner, he can control the temperature in the balloon. This changes the amount of lift the balloon has, so it goes up or down accordingly.

Some limited ability to steer is given by the fact that wind direction at different heights can vary. The pilot can use this to gain a small amount of control over his direction.

But most importantly, he has plenty of fuel. A wise pilot will land well before he runs out of fuel, normally in a convenient field. He then gets picked up by other people who have been following the balloon on the ground by road.

ArtificialAffect: They don’t. They can raise and lower the balloon by firing their burners to heat up the balloon’s air. The more they heat the air up, the higher they will go (the less dense the balloon is and therefore the more bouyant.) If they stop using the burners the air will cool down and the balloon will slowly start to sink. Besides that however, they have no other ability to steer. That being said, wind goes different directions at different heights, so they can adjust their direction that way. There is no guarantee that the wind will go the direction they wish though, so they are ultimately at the hands of mother nature. Often the fairgrounds or other take off locations will have several tools to measure the wind speeds so that they can get a general idea of where they are going so that they land in a field instead of the woods.

Since they don’t know where they are going to land, most balloons have a van that follows them on the roads below. The people in the van have the job of picking up the passengers and taking them back to their starting position as well as help take down and haul the balloon.

Besides that, a lot of what can go wrong is stopped just by preventative measures. Hot air balloons won’t fly on a very windy day or in lightning, for example.

RatsuMacKinnon: Why do they not have any sort of fan or similar device to help steer even just a little bit? Would they just end up spinning in place?

sectokia: Before going up they send up a weather balloon to see which way the wind blows at different heights

To measure wind while in the air they go high then drop leaves/foam and see which way it blows as it falls below.

They do this until they are the wind moving in a direction they want, then descend to that height by letting out hot air.

DrSaltmasterTiltlord: you’re getting lots of answers but nobody has addressed the fact that you can look up the direction and speed of upper layer winds on government meteorological websites. This is way way way above the ELI5 level, but here’s your link in case you wanted it explained like you studied meteorology in college: http://www.spc.noaa.gov/exper/soundings/17121200_OBS/

This observation was taken this morning in western PA. Combine this with the kinematic inputs found here: http://www.spc.noaa.gov/exper/sref/sref.php?run=latest&id=SREF_wind_vector_300mb_ and you can pretty much know where you’re going to go, provided that you can read the charts

zinc_your_sniffer: No one answered the part about it all going wrong. There are videos of the balloons igniting, and they simply burn up in mere seconds. What’s left is a basket full of people who literally fall straight to the ground from whatever height they are at. Usually killing many of them. Having seen that, you will never catch me in one of these things.

supertucci: Yikes. Will never forget doing surgery on a lady who went ballooning and somehow hit a power line. Was paralyzed in a strange “pattern” different than usual spinal cord injury , as electricity fried some of her nerves more than others. This was years after the accident and she was clearly still upset to tell the tale

Azurealy: People with their walls of text. Its Explain like their 5. Jeeze. Ok listen. Hot air rises. Its less dense so it goes above the denser cold air. The pilot lets heat in the ballon to go up, and can open a hatch on the top to make it go down. That is all the control he has. He just needs to get lucky to have winds blow the way he wants past that. Usually he also has a radio to call a friend with a truck that follows them around when they decide to land in a random field to pick them up anywhere.

RedditThreader: Warm air is lighter than cold air. Think about a cup in the sink turn it upside down and it wants to float. The hot air balloon works the same, a gas powered flame heats the inside of the balloon to make the now hot air float upwards.

The pilot opens and closes the top of the balloon to release some of the hot air to sink. A pilot will guide the balloon using the natural air currents rising and falling into the wanted directions.

SevenMason: If it all goes wrong, they end up back on the ground.

« ELI5: Why do many “bad habits” involve chewing on or picking at our bodies (nails, cuticles, lips, etc.)? Why is this so satisfying and hard to stop when it can be bad for our bodies?
ELI5: Why does the visible light spectrum appear cyclic to the human eye if the spectrum is based on specific linear wavelengths of light? »