How do the pictures just slowly come in there etc? 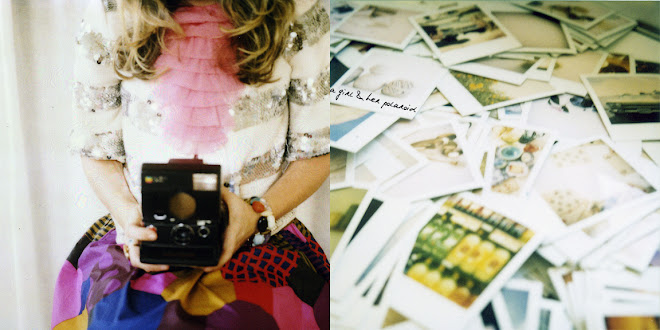 In a nutshell, a polaroid is a little envelope that contains all the chemicals needed to develop and fix the picture. Light hits chemicals that are sensitive to light, which react with reagents in a different layer that cause dyes to migrate into the first layer and become visible.

Developing a photograph takes time (the chemical reactions aren’t instantaneous), and the first process to do instant color prints didn’t work very well. The solution was to add another layer of chemicals that opacify soon after the exposure to light. This makes it dark inside the layers, and allows the time necessary for the developing and fixing process to happen without being exposed to more light. That opacifier breaks down and becomes clear after a period of time. That’s what you’re actually seeing when the polaroid comes out grey and image slowly shows up.

sheamcvaugh: /u/bazmonkey covered it well, but two things I will add:

Polaroid photos only need time to develop. “Shake it like a Polaroid picture” was something of a nervous tick we developed as a society. Shaking it did not help the photo develop at all.

Another thing; if you use something with a point to draw on the photo as it’s developing (a screw driver, a nail, etc) you can get a pretty crazy effect.

tx69er: Many of the other posters have covered the developing process well, but I would like to add one thing. The white section down at the bottom contains many of the chemicals in a little pouch. When the photo is taken and comes out of the camera, it passes through rollers which pop this pouch and press the chemicals along the picture. The chemicals are still contained within internal layers so they don’t get everywhere, though.

67Mustang-Man: Here is how the old 600 film used to work, [Each instant photo contained chemical pouches at one end](https://petapixel.com/2011/05/18/how-polaroid-instant-film-works/) I remember as a kid when the photo was taken my grandfather would put them face down in a small cardboard box that he carried the camera in to help keep them away from light as they developed.

Also wiki has a great right up about the [instant film](https://en.wikipedia.org/wiki/Instant_film)

sboss9: Well…You shoot the photo, then you swing the camera around your head by it’s strap like a helicopter, then viola! Photo is ready to come out! It’s easy!

safewordisouch: Remember that polaroid pictures were 2 layers. They first made the negative image and then the reversed color onto the final layer you saw as the picture. Hence polaroid, as in polarized.

« ELI5: Socrates arguments for the immortality of the soul and the cycle of opposites argument
ELI5: Why does it get harder to fall asleep the more sleep-deprived you are? »