Why are Lions used so much on European Heraldry, especially British/English ones, despite lions being primarily found in Africa? 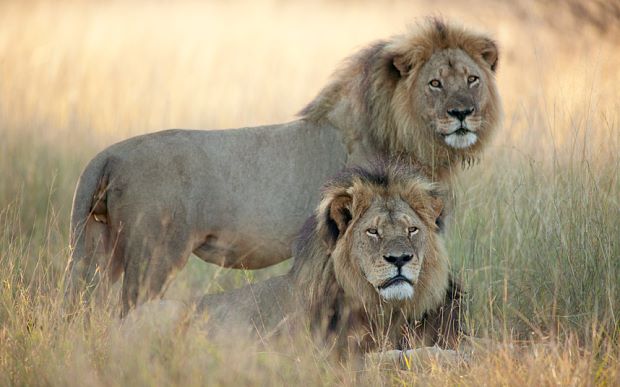 drafterman: Well, the dragon is used a lot too, even though it’s found… no where.

It isn’t about the actual, physical representation of the animal. It’s about the symbolism and ideas it represents. Europeans thought of the Lion as “king of the jungle.” A powerful, noble animal at the top of its food chain. There really isn’t an analogous animal in Europe (aside from wolves, which always had a negative connotation).

Mr-Magnus: The lion was widespread in Europe until roughly 100BC, and was often used by the Romans in the Colosseum, so it isn’t like the lion was completely unknown to the European nobility.

The lion represents strength, power, nobility, dignity, wisdom, courage, and dominion. These are all fantastic traits to have represent you as a king. Having a lion in your herald is a statement of your strength and bravery, the authority and power you hold.

Heralds are almost always symbolic, so whenever you see a herald depict some animal or object try to imagine what said object represents, what statement that herald is trying to convey about the people bearing it.

King_Kayamon: There were lions in Europe but they went extinct because they killed them all

xiagan: The lion was one of the most widespread mammals not too long ago. Only humans topped him expansionwise (and reduced his appearance significantly).

HotRodLincoln: In the 900s, the Kingdom of Leon (Leon means Lion) was in the Spain/Portugal area. I don’t know how they got their lions, but Spain/Portugal kind of kept them.

In the 1100s, Richard I used them. Heraldry was kind of formalized, so later designs English and French used them in corners.

Then with Great Briton, Scotland and Ireland also adopted designs containing them from England.

I’d say this is why they’re common: the largest countries used them, and over several rulers.

That’s not to say Lion-Mermaids, and Unicorns and other mythic beasts weren’t commonly used.

Also, many of these lions are “leopards”, when on crests of Abbots, or bastards.

In the 1500s, the Nordic Countries, Denmark first adopted the lion presumably for “The Lion of Judea”. These usually carry weapons. This sort of broadly explains Flanders and Norway.

Mostly, you see it a lot because England was very successful.

tinyyellowhouse: There are a number of reasons European royalty would have used Lions in their heraldry. First off, Lions are huge, powerful creatures. Having a Lion on your banner or coat of arms or armor evoked those qualities. Lions have a biblical context. Jesus Christ was called the Lion of Judah, and as many Europeans trace back to a Judeo-Christian tradition, leading an army with one or more religious symbol would have been common. Along those lines, since the King rules by “divine appointment” from God and because the Lion is the King of the Beasts it would make sense to use a lion in your coat of arms.

TheChewyDaniels: Check the Wikipedia article for “European Lion.”
Tl;dr
Europe used to be full of lions, they went extinct, but not before humans had the chance to encounter them. Their presence in the European imagination survived long past their disappearance.

Durog25: Not sure if it’s already been said but

The lions in Europe are Barbary lions native to north africa and Mediterranean Europe, these lions are almost certainly extinct.

They are a separate group from African lions with mains that stretch further down the animals back and neck.

varialectio: Exotic beasts were transported to Europe from Roman times. Not just for the arena but they would have been used as status symbols in processions and special gifts for high-ranking individuals.

There are records of the Tower of London having a menagerie from the time of King John in the early 1200s. Exhibits at various times include lions as a gift from the Holy Roman Emperor Frederick II, also there was an elephant and a polar bear.

Some of the lions, both as animals and in heraldry may actually have been leopards, there was often little distinction made.

captainminnow: My understanding is that lions were fairy common in southern Europe for a long time, until they were killed off. So they wouldn’t initially have been a random cat from far away that was being used.

extispicy: I have no idea if there is a connection, but a lion was the [symbol of the biblical Kingdom of Judah](https://en.wikipedia.org/wiki/Lion_of_Judah#cite_note-1):

> Judah, your brothers shall praise you; your hand shall be on the neck of your enemies;your father’s sons shall bow down before you.

> Judah is a lion’s whelp; from the prey, my son, you have gone up.

> The scepter shall not depart from Judah, nor the ruler’s staff from between his feet,

> until tribute comes to him; and the obedience of the peoples is his.

> Binding his foal to the vine and his donkey’s colt to the choice vine,

> he washes his garments in wine and his robe in the blood of grapes;

> his eyes are darker than wine, and his teeth whiter than milk.

thepineapplemen: I think the lion would be fairly well-known to Europe due to lions being referred to throughout the Bible.

RagingTortoiseGaming: I am not sure when this was exactly, but a lot of books in Europe were originally from Asian countries. Lions were not yet extinct in Asia at this time, and so there were often drawing of them in these books. When these books came to Europe, they found these animals interesting, so they were often used in crests and seals.

_This_Is_Stupid: /r/AskHistorians has a significant number of discussions on this very subject; [here is the list](https://www.reddit.com/r/AskHistorians/wiki/faq/europe#wiki_lions_in_european_heraldry)

The short of it is that lions had lived in Europe, and had long associations with certain traits that were incorporated into heraldry as a means of displaying these traits. Honor, bravery, etc.

duckdownup: Europeans were probably familiar with lions for many many centuries. Southern Europe is only separated from Northern Africa by the Strait of Gibraltar which separates Spain (Europe) and Morocco (Africa) by only 8 miles.

phily1984: Lions existed till the 4th century C.E. in Greece and in the Caucasus regions until the 10th century. So for family emblems and crests to have lions on them in Europe kinda makes sense. Travelers and Crusaders defiantly had first hand accounts of lions.

« ELI5: How Dual-Clutch Transmissions and Continuously Variable Transmissions use clutches but do not stall.
ELI5: Why do finger nails grow faster than toe nails? »