Seriously…. wouldn’t this take an enormous amount of power? Half the time I can’t get a decent cell phone signal and these guys are communicating on an Interstellar level. How is this done? 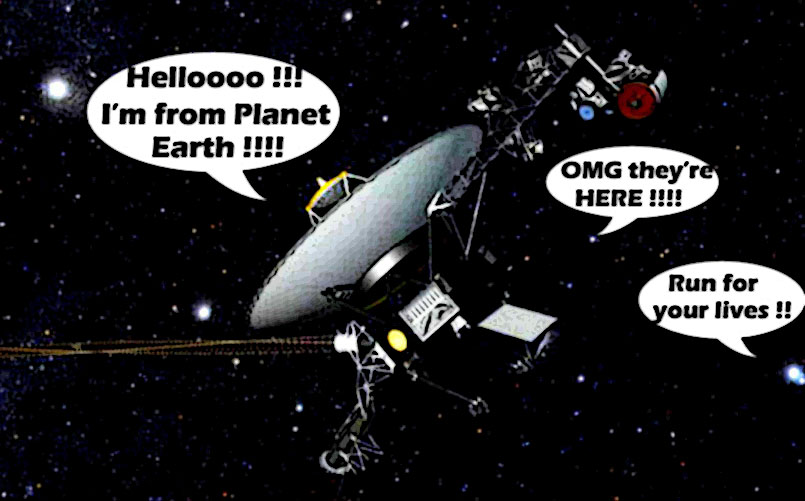 Snewzie: Variations of this question have been well covered in this sub. As a reminder, please search the archives before posting.

nated0ge: >I can’t get a decent cell phone signal and these guys are communicating on an Interstellar level.

Mobile phones work off UHF (Ultra High Frequency), so the range is very short. There are usually signal repeaters across a country, so it gives the impression mobiles work everywhere.

>wouldn’t this take an enormous amount of power

So, not really, as long as there is *nothing* between Voyager and the receiving antenna (usually very large). As long as the signal is stronger than the cosmic background, you’ll pick it up if the antenna is sensitive enough.

So the ELI5 version of this would be :

– Listening to a mouse in a crowded street.

– In an empty and noise-less room, you are staring at the mouse’s direction, , holding your breath, and listening for it.

whitcwa: They used a very large dish to focus the transmissions into a narrow beam. The bigger the dish, the greater the effective power. A 70M dish has a gain of around a million (depending on the frequency) .

They do use high power on the Earth side, but the spacecraft has only a few watts, and a small dish. The Earthbound receivers use ruby masters cooled in liquid helium to get the lowest noise.

FujiKitakyusho: One thing that they do in order to make communication with these spacecraft more reliable is to send the same batch of commands multiple times, each with a very slight frequency offset. This accounts for any relative velocity variation between Earth and the spacecraft, which may receive 3 of 5 commands sent, for example. The signals from the Voyagers are not strong – they are, in fact, weak compared to the background noise, but clever software algorithms have been developed which identify and isolate these transmissions.

taggedjc: There isn’t very much in the way of it, since it is mostly empty space between there and here.

There is a high latency, of course.

Your phone signal can’t work with high latency since it is designed for quick communications, and it is prone to errors caused by other nearby signals.

CoolAppz: 1. The electronics on board was state-of-the-art at the time of launch.
2. The electronics had to be tough and a lot of protections had to be added so it could survive cosmic rays and other hazards.
3. The electronics was way simpler that it would be if built today. Less complexity less stuff to fail.
4. Because the hardware is simple, the software it runs is simple, compared to today standards, so, less or no bugs, less motives to fail.
5. Voyager was built with a lot of redundant components. So, if one part is not working well, there is another wan that works and the whole thing keep going.

But obviously, a lot of stuff is broken by now. Space is hostile as hell and time is unforgivable for any machine and organism. It can last long but it will fail eventually forever.

The only hope is that some civilization finds our treasure chest one day and see they are not alone.

mclamb: They use a system called the Deep Space Network that uses huge satellite dishes located all over the world.

You can actually see which spacecraft are connected in real-time here: https://eyes.nasa.gov/dsn/dsn.html

Secondly, NASA has access to giant radios and receivers.

Two or more 34-meter (112 ft) Beam waveguide antennas (BWG) (three operational at the Goldstone Complex, two at the Robledo de Chavela complex (near Madrid), and two at the Canberra Complex)

Voyager has a 3.7-meter (12 ft) diameter parabolic dish high-gain antenna to send and receive radio waves via the three Deep Space Network stations on the Earth.

Your cellphone antenna is about as long as your phone

Here you can see what all the DSN arrays are doing – https://eyes.nasa.gov/dsn/dsn.html

FellKnight: We know where Voyager is, it knows where the Earth is, and we built extremely large satellite dishes to be able to pick out the signal from the background noise.

Dusty923: Sending radio waves long distances is hard, but to help they use a dish to concentrate the antenna’s output into a beam rather than out in all directions. This greatly magnifies the signal in the direction that the dish is pointed. But this then requires the spacecraft to be very accurately pointed at Earth, or the beam will miss the Earth and we would not receive the signal. So the spacecraft uses thrusters, basically tiny rocket engines, to turn the craft to always point the dish towards Earth. Voyager has two sets of thrusters, and the set that they normally use to point the dish are running out, so they tested the other set to make sure they can start using them for pointing the dish. The test was successful, which means they can still point Voyager towards Earth for a few more years.

For power, they use plutonium. Plutonium is radioactive and heats up when you put enough of it in one container. You can make electricity if you put something hot – the plutonium – and something cold – space – together, which powers the radio dish, as well as the rest of the spacecraft. Unfortunately, the plutonium makes less and less heat over time and will eventually no longer be able to make enough heat to power the spacecraft and the antenna. When this happens Voyager will no longer be able to talk to us, or run its computer. It’s lifetime will be over.

It’s not about the amount of power needed to generate and broadcast the signal from the instrument, it’s about the massive infrastructure needed to *hear* it. As such, NASA has built a massive ground system called Deep Space Network that’s designed specifically to communicate with interplanetary spacecraft. Three ground stations in Australia, Spain and California coordinate their huge arrays of dishes (dozens at each site, each one with its own 70m dish) to send and receive signals to basically all of the exploratory research instruments in the solar system. In the case of Voyager, it takes something like 30 hours just to get a signal there and 30 hours to get it back, but as long as it’s RTG can create enough energy to power it’s high gain antenna, we’ll still be able to talk to it.

UpdatedDisaster: How long would it take for the signal to reach with something like this?

TerroristOgre: The earth rotates constantly though. So if it’s a single straight beam signal coming back in a tunnel, how do we maintain connection?

airbrat: How long did it take for Voyager to receive the signal?

bandospook: I didn’t read all the comments before replying, so I apologize if anyone has already mentioned this, but a key factor in digital communications is the energy in the received signal, not the power used to transmit it. These two quantities are related by the amount of time it takes to transmit one bit of information. If you multiply power by time you get energy. In your typical cellphone link you’re transmitting a lot of information very quickly (i.e. Mbps). When you compare that to the amount of data it takes to, for example, command a microthruster to turn on, you’re looking at a command sequence that’s only a handful of bits, maybe a kilobit. And you can afford to wait seconds (I’m not talking about a delay now because that also takes a while, but the time it takes to receive the message from when the first bit arrives to when the last bit arrives at the receiver). In addition to this, as others have said, the sensitivity of the receiver is very good (because it’s cold, it’s looking mostly at cold space, and it has a very narrow beam aka high gain), and there is no obstruction or significant sources of interference. However, simply a lower data rate helps to receive a weak signal more strongly. Hope that helps. (I am an electrical engineer who works for an aerospace company designing communications satellites.)

deynataggerung: Follow up question. If Voyager is 21 billion killometers away, that means the latency is about 48 days. Added to that our latest data on Voyager at time of message launch will be 58 days old. How can we reliably know where Voyager will be in 96 days so we can aim in the right spot. Or is it still moving in a straight line away from earth?

mmmmmmBacon12345: There are two factors that impact how far apart you and someone else can communicate

How loud can you shout? How quiet of a sound can you hear?

Voyager is little so it can’t shout very loud, and it can’t hear extremely quiet things so the Earth station makes up for it. NASA uses very large and very powerful satellite dishes to blast transmissions at Voyager, and extremely large and sensitive antennas to listen to the really quiet messages it sends back

The antennas on Earth send about 20 kW(73 dBm) of power at Voyager for it to be able to hear the message. Voyager sends back a 20 W signal and by the time it arrives it is at an extremely low power level (<-240 dBm, no i can’t convert that into normal watts its too damn small)

flee_market: > Half the time I can’t get a decent cell phone signal

songsandspeeches: I remember reading on a NASA site about something that they use something called the DSN – or Deep Space Network – to control stuff that is far away like the Mars Rover. I believe it relies on a network of satellites. I can’t say for sure this is the same system they are using for Voyager 1, though. Sorry! Hopefully someone can add more than I.

faxfrag: Question: when does this happen?

« ELI5: Why are cheap glasses with a positive prescription (ie reading glasses) readily available, but negative prescriptions need to be custom ordered at a much higher cost?
ELI5: What does the tax bill that was passed today mean? How will it affect Americans in each tax bracket? »