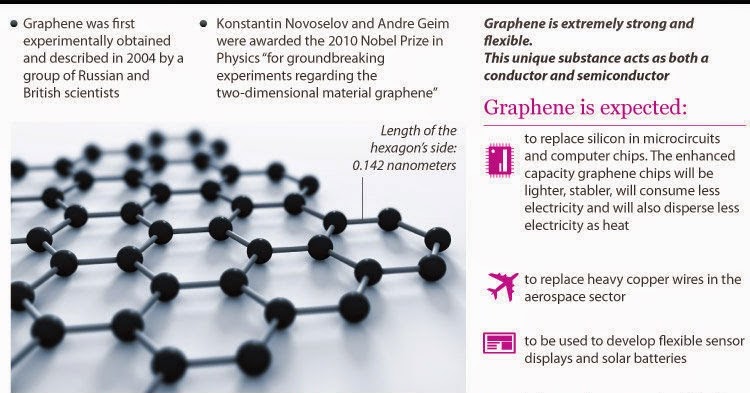 Holy_City: Graphene is a very new technology. Right now the benefits don’t outweigh the costs of mass production, although iirc mass production of hybrid Li+/graphene supercapacitor batteries was announced this year (by Samsung I think, could be wrong).

It usually takes 10-15 years for new materials and designs to go from academic labs to mass production. Even the transistor didn’t enter consumer technology until about a decade after its invention.

UncharismaticGorilla: I just did a term paper on this!

To keep it simple:

2. Carbon nanotubes were discovered years ago. And they’re just graphene sheet rolled up into cylindrical tubes so they have very similar properties as graphene and is already a more established technology.

Edit: I noticed my response was kind of generic and similar to alot of other answers.

NostalgiaSchmaltz: It’s great, just not cost-effective right now. That’s why you see all sorts of cool things in laboratories, but nothing has actually reached the store shelves yet.

Kind of like solar panels; they are really nice in theory, but still very expensive and kinda hard to set up for the average consumer.

TXGuns79: It took carbon fiber decades to hit the market. Now, you can’t swing a dead cat without hitting something made out of it. It used to be that wonderful super material of the future.

Graphene is really good at a lot of things, but really expensive to manufacture. Until someone can come up with a good way to make tons of graphene cheaply it’ll stay in the lab and other specialized(read high budget) applications

UncleDan2017: No one has found a way to mass produce high quality, usable graphene. It’s great properties pretty much rest on being a perfect layer of carbon where all the atoms are oriented correctly and bonded to other carbons in a sp2 configuration, and there are no voids and everything is in a perfect surface.

sealriddle: Because when people first claim graphene is good, they promote graphene’s electrical properties. Later people realized 1) using a narrow (or like nonexisting) bandgap material is a bad idea for making transistors and 2) graphene’s good conductivity deteriorates when you put it on a regular substrate.

Then people switches to using graphene (or nanotubes) for mechanical properties. That becomes a different story.

Btw, many people took CMOS scaling the wrong way: “it is small, it is thin, so it must be good.” Not really.

cman674: In addition to being hard to manufacture, it and its close relative carbon nanotubes are sort of hot research topics now. Non-scientists think they sound cool but get very watered down explanations about them that can make it seem like they are a perfected technology.

These topics get tons of research funding because of that though, because the people granting funding are not scientists, they are regular people who think things sound cool based on a little blurb summary about it. It’s sort of like the average person doesn’t see the whole picture.

themiddlestHaHa: I hate these answers of ‘cant make it out of the lab’

If you don’t know why its so expensive to produce then let someone else answer.

Stumpre: [The GEIC ](http://www.graphene.manchester.ac.uk/collaborate/geic/) opens next year in Manchester to address exactly this. It’s a bridge between the scientific exploration and real world implementation.

nukeomg: its very difficult to mass produce. it was first discovered by someone basically putting cello tape onto graphite and getting a very thin sheet (1 atom thick iirc) there is no real way to upscale cello tape sticking. until we find a way to produce large amounts of graphine it can’t be used practically.

August_Revolution: Graphene is already being used in carbon composite commercial products that have been around for decades. Simply a matter of a process was developed that made graphene layers before the science was understood. Much like how early metallurgy developed. Now we an take modern methods to evaluate those materials and we have found that in fact we have been making and using graphene in many composite materials.

HolyAty: Because it’s very very expensive. For example, BMW is constructing a dam for a hydroelectric plant just for the energy needs for their new carbon-fiber factory.

the_deepest_toot: Because it’s still very new technology. And one obvious reason is that *it’s an atomically thin sheet,* and while it’s mechanical robust *on the nanoscale* it’s difficult to implement in macroscale systems.

Another aspect is that much of graphene’s properties, like it’s really good thermal and electrical conductivity really depend on its supporting substrate. For example, its *k* constant drops from like ~500W/mK to something like 600W/mK on silicon oxide. This is important because it’s almost impossible to employ graphene in a system without a substrate.

A second reason why we don’t see it widely used (yet) is because synthesis techniques still don’t allow to produce large-area sheets. Sure, you can grow a 1cmx1cm sheet on copper foil in a CVD furnace and then transfer it somewhere else, but this doesn’t scale well.

« ELI5: How is it possible that when talking on the phone, person A can suddenly lose signal and not hear person B, but Person B can hear person A perfectly well?
ELI5 the difference between 4 Wheel Drive and All Wheel Drive. »