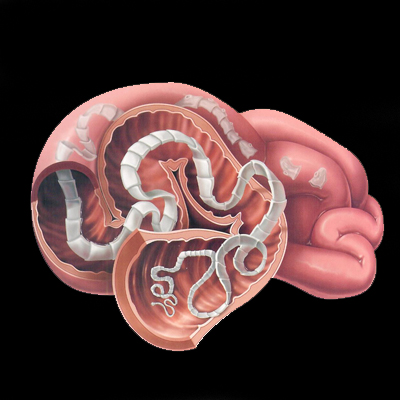 pahasapapapa: To quote an expert:
EDIT: my post was deleted because it was short with a link. Here is the linked text:

This is a great question, and is the type of question that many “experts” forget to ask! Much of the information in this response was provided by someone who does research on parasitic worms, and he was also very impressed with your question.

Tapeworms are adult parasites of the class Cestoda, and they live in the intestine of their hosts. This environment seems very harsh to us, being acidic and full of digestive enzymes. However, like any good parasite, tapeworms are well adapted not only to survive this environment but use it to their benefit.

It is worth noting that tapeworms have no digestive canal of their own; they have to take up nutrients across their surface. The type of cells present and the structure of the tapeworm surface both reflect the ability to absorb nutrients this way. For example, the surface area of the tapeworm is greatly increased by its formation into numerous projections, (similar to the microvilli of mucosal epithelial cells).

There are a number of factors that keep the tapeworm from being digested in the intestinal environment. These include:

A distinct outer surface, manufactured by the worm, which is replaced continuously with a turnover time of approximately 6 hours.
Absorption of host enzymes at the outer surface of the tapeworm.
Direct inhibition of the activity of host digestive enzymes.
To explain these points a little further:
The fast turnover time of the outer membrane of the tapeworms is likely part of the tapeworms’ defences against attack by host digestive enzymes since a “new coat” is being continually produced.

Apart from its own enzymes, which can be found on the surface of the tapeworm and are used to break down molecules into forms that can be absorbed, (e.g. glucose, other sugars, nucleosides, etc.), certain host enzymes have also been found adsorbed to the worm surface. For example, the host enzyme alpha-amylase absorbs to the surface of the worm, and is used to break down starch.

Other host enzymes, such as trypsin and chymotrypsin, with which you may be familiar, are actually inactivated at the surface of the worm.

So, in effect, the tapeworm can avoid digestion by hijacking some host digestive enzymes, and inactivating others.

Amazingly, the immediate environment of a tapeworm in the host intestine is quite uniform despite the intake and digestion of food periodically.

I hope this has answered your question, at least to some extent.

One book that includes the type of information I have included above is:

cedley1969: Threadworms or pinworms actually use the stomach acid to trigger hatching. The eggs are ingested and the stomach acid strips away the sacrificial outer layer causing them to hatch later when they have passed through to the lower intestines. The adult worms irritate the sphincter to aid the dispersal of the eggs by scratching so that they are not simply passed into the stools of the host but are instead lodged beneath the fingernails etc.

dragonfang12321: There are life forms that live in all kinds of hostile environments on earth. In this case the eggs of tapeworms have adapted to survive the acidic nature of the stomach then hatch once in the intestine.

Alamander81: I was thinking about this but got immediately grossed out at the thought of digesting a tape worm.

« ELI5: Why do cold surfaces sometimes feel wet even though they aren’t?
ELI5: When you’re unconscious due to trauma, do you sleep and rest? Or is it tiring? »