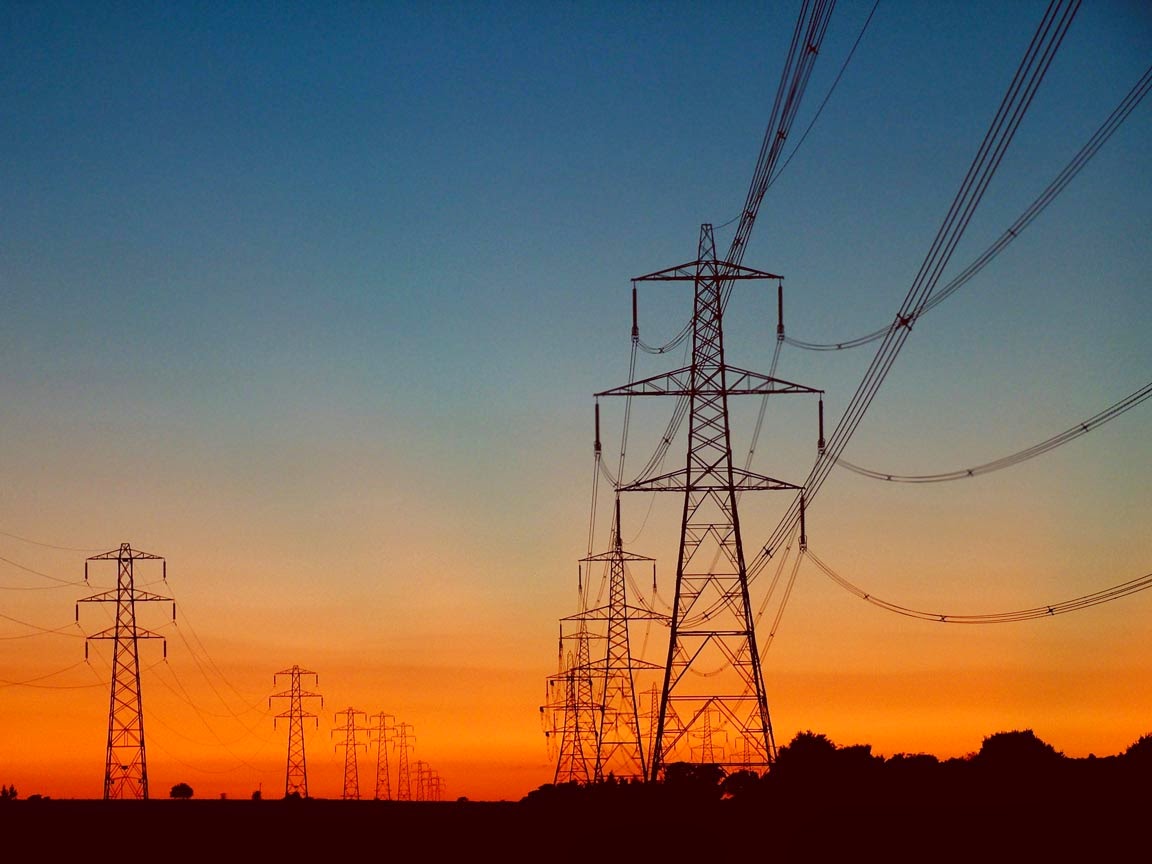 Soranic: They space the wires far enough apart (for their voltage) that rain won’t cause an arc between phases.

If you were to hover between them, it might cause an arc.

There was a lot of testing done to determine how close is too close for electrical safety.

Spinolio: If you look closely at a picture of a glass insulator like they use on the towers, you’ll see that it’s designed to have both a long surface area between one end and another, plus the bell shape helps ensure it’s hard for rain to reach or remain on the inside surfaces.

Power companies also wash the insulators as part of regular maintenance, using boom trucks that spray deionized water that’s a very poor conductor. By keeping the insulators clean, when rain hits them it doesn’t become a good conductor and voltage leaks are minimal.

martinborgen: Isn’t fresh water not really that conductive? While salt water is.

EDIT wording – rain is still conductive, just less so than you might think.

golden_one_42: A rough rule of thumb is that air will insulate about 1000 volts per millimeter.. Or 10k volts per centimeter. That means that on the highest 330kv lines, you only need the cables to be at least 33 cm apart.. And they make sure that the earth cable (usually the single cable) is the closest cable…and that other cables are at least a meter away.

Next, when the cables pass a transmission tower, the insulator that holds the cable up is at least a meter long… And there’s a cable that jumps the join, so the path of least resistance is always away from the tower.

Next, the single most common mode of failure for hv lines is that they oscillate when struck by strong gusts of wind.. ^1 Which is why cables in exposed areas are either bundles of cables separated by plastic spacers, or have large plastic “football’s”on them to stop resonant vibrations.

^1 The cables on one side “skip” one way, and the cables on the other in the opposite direction, and in some cases get close enough to touch… So you make sure they are under enough tension they don’t touch, or don’t oscillate.

The next most common reason for hv line failure is either joint failure.. The cables have to be joined at some point, and the joins fail because the cable is flexible. You can spot the fault with a thermal camera, and the fix is simple. (Cut, weld)…
Or bird damage. Big Bird lands on cable, stretches wing, gets close enough to next cable for the voltage to jump.. And the arc runs away.

Fineous4: Power System Engineer here: Insulators are used to keep circuits separated. Insulators are typically ceramic and are structural supports that don’t conduct electricity. The insulators have groves on them so a complete coat of water cannot exist to create a circuit from phase to phase or phase to ground.

setxbeer: Just to add, we go into the 138kv switchyard in the rain sometimes to open up gas circuit breakers and isolate the buss from the grid in the pouring rain. It’s actually not an issue to be around high voltage to certain distances.

spiff2268: Question for you guys who know electricity:

There’s a path my wife and I have hiked a couple times that goes under some high voltage transmission lines. Both times we went under them they were making a sound like a steak sizzling. Why is that? (The first time we heard it we were like, uh, do we really wanna walk under that?)

mantrap2: Pure water is a very good insulator. Rain water directly from the sky is pretty close to pure. Even fresh water (rivers/lakes) isn’t all that as a conductor of electricity. So the issue doesn’t come up as often you’d think. Not even at modest voltages (e.g. 120 AC line voltage or even at 100s to 1000s of voltage).

To be a good conductor you need “ions” from dissolved salts. So salt water conducts better.

As others have said – given ENOUGH voltage (“electrical pressure”), even a shitty conductor will start to conduct. But then the trick is distance: the amount of conduction (aka “current flow”) depends on distance (R = 𝜌 d/A, I = V/R, increasing d increases R which decreases I).

Petwins: Electricity doesnt actually like water. It wont travel through water unless any other easier route is accessible.

But that aside, the electrical components are sealed, its water proofing. Usually just a few rubber gaskets. Power transmission lines are exposed to the elements (at least not the portion the power actually goes through.

So they do it the same way they waterproof anything, put it in a box and seal the box.

ElaNoraGemm: They sometimes make insulators out of a special rubber that is hydrophobic which means the water beads and runs off.

In areas where pollution is higher – such as near the sea or near mines or bush fires area – they increase the distance across the surface of the insulator with a wider insulator or ribs to more surface on the underside.

Heavy rain isn’t as much of a risk as any salt/pollutants/ash that might conduct will wash off with the rain. Fog is a bigger risk where the insulators are just wet enough to dissolve the pollution or salt on the insulators make a conductive path.

Have you noticed some stacked ceramic disks for the insulators? It is not to make it cute, it is to add more distance! Water would wet the surface, if you unfold you will find out that there is quite a big distance between the wire and anything else, like the structure.

Water is not that conductive, it have an high resistance. Combine that with a long path and you get very little current. That current still want to make the water heat up, but there is not enought current to cause an issue. Also, the distance is so great that an electrical arc won’t happend.

seanprefect: There are 3 main points that are relevant.

first you need to create an unexpected conducive connection between the two wires to cause a short circuit so the wires are spaced far enough apart that that isn’t likely to happen.

Second rainwater isn’t really that conductive (pure water isn’t conductive at all) so it’s not like sticking a copper rod between the wires or anything.

third the wires are often shielded.