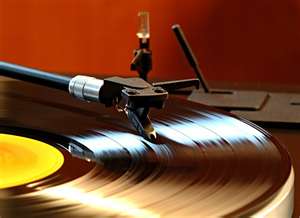 fox-mcleod: Sounds are vibrations on the air. Highs are fast vibrations and lows are slow ones. The needle passes over ridges that cause it to vibrate fast and slow.

bestCallEver: Sound is just vibrations in the air, picked up by little hair like fibers in your ear. If you’ve ever done the “make your own record player” experiment with a needle and a piece of paper rolled into a cone shape, you get the basic concept that the tiny bumps and grooves of the record, produce a reliable vibration when you run a needle over them, and when that vibration is amplified , even just via a piece of paper, it becomes recognizable to the human ear.

Fudge I’m no expert but that’s how I understand it.

WRSaunders: Analog techlologies have maly issues, like care and maintenance, but they are analog – no sampling, errors, or bandwidth limits. The original lossless technology.

aerospce: If you take any song and split it into chunks of a fraction of a second each of those chunks would just be one noise. This noise can be easily represented by a fairly simple sound wave. Putting a bunch of chunks together makes a complete song but in the end it’s just a bunch of simple chunks.

SquidCap: It can’t. Not perfectly. I agree with you: how it can work at all with such great detail is short of a miracle. But it isn’t without serious compromises:

Bandwidth is 40Hz to 17kHz (exceptions are there of course, just so vinyl lovers dont feel the need to say how i’m wrong because some records do exist outside those limits..).

Lower frequencies simply are too long to track with the amplitudes they need without the needle jumping out from the groove. We can also hit the next groove so the spacing would have to grow and there would not fit that many minutes on one side.

Higher frequencies are too high and they can burn the voiceoil of the carving machine. We need serious cooling to go over 20kHz. 100kHz is the “world record” with liquid nitrogen cooled machine at full speed. Lowering to half speed carving means that the wow and flutter that are ALWAYS there, will become much harder to control and can rise up to be detectable. 16-17kHz is common lopass, 40Hz is hipass: that is our bandwidth. Doing this will give us at least some hope but we are not done yet. Not even close..

Next comes the fact that our surface noise is also a problem that makes the high frequencies VERY hard to reproduce. The noise that the needle makes when it scrapes along a surface would be too much. Since we have A: trouble with long waves taking up physical space and B: surface noise at highs.. we can attacks them both by using RIAA emphasis. What it means is that we employa filter that lowers all low frequencies (before we carve the master disc) and raises up all high frequencies. We emphasize. When we playback the disc, after the needle has picked up the vibrations, we put the same filter but in reverse: boost bass and lower the highs. This makes the surface noise drop below masking effect (louder sounds mask quieter ones) while also giving us physical room for our bass.

And after this, we have to remember that the lower we go, the less and less channel separation we can have. In fact, everything below 250Hz is in increasing amounts mono information: both channels share the same signal. There is no stereo bass in any vinyl.

And we are almost done.. We have to also limit the dynamic range after all that to about 70dB theoretical, around 50dB practical This means we can not pack as much energy into the track as we want, we can’t peak limit the material to death.. This is where the “vinyl is more natural” comes from, it is just a different master, with the added flaws from your needle, RIAA filter and the inevitable slight distortion..

« ELI5: How can the gunpowder inside the ammo shell explode of there’s very limited oxygen for combustion?
ELI5: Why do planes need to turn? »