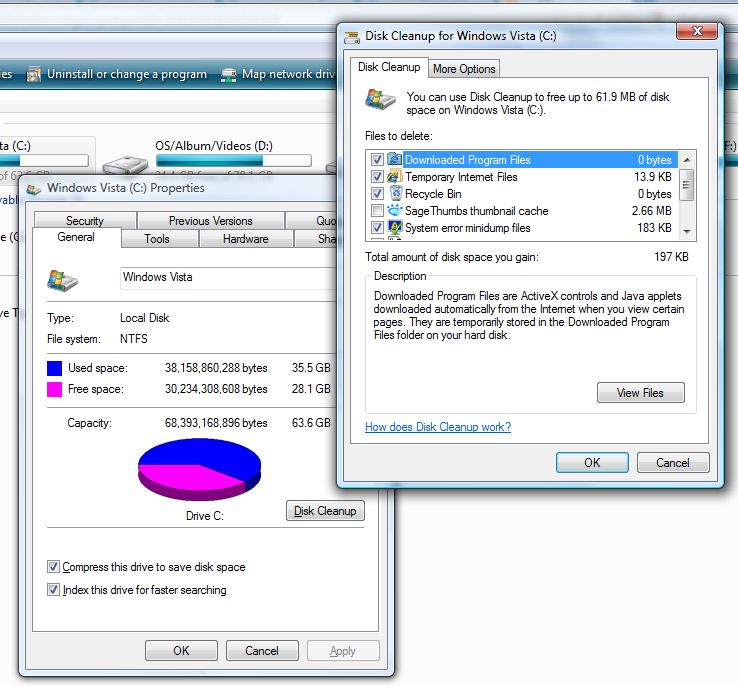 Starting from Windows 7 and Above, if you click the start menu and type in Disk Cleanup, Windows will calculate all the stuff that it deems necessary it can clean up. You’ll be presented with this list that you can then choose from. If you want to save even more space, you can also choose the clean system files.

The following link will go into a quite a bit more detail:
https://www.techrepublic.com/article/how-to-clean-up-system-files-with-the-windows-10-disk-cleanup-tool/

I do this commonly across my 2 machines and I just did it to my laptop and I was able to reclaim close to 3GB again.

Windows 98: Open Windows Explorer or My Computer. Right-click the disk you want to free space on, and then click Properties. On the General tab, click Disk Cleanup and click the unnecessary files you want to remove, then click OK

Hellmonkies2: Also, if you disable hibernate on your computer it’ll free up additional disk space equal to the amount of RAM on your machine. Windows reserves space on your HDD for when you put your machine into hibernation to dump everything loaded onto your RAM. When you turn your computer back on, that RAM data that was dumped on the HDD gets loaded back into RAM so it’s as if your computer was just in sleep mode.

samtheman578: And if you’d like to really clean out your hard drive, give windirstat a go. Allows you to visualize and interact with all your used hard drive space

avarweth: Thanks. Just recovered some space on my work computer. I’d forgotten about this.

321bacon: 74 mb removed lol. I was hoping for some life changing disk space back!!

If you run **Disk Cleanup** (filename: `cleanmgr.exe`) as Administrator you will be prompted with additional cleaning options not available to standard users.

herorush: Lol was having like 40gb taken up by winsxs today and I find this after I spend hours looking up a fix.

Syfilms64: I use CCleaner all the time. Does this do more than that or is this basically the same thing?

Rugger11: Err, disk cleanup has been around since at least windows 95, it isn’t something new introduced in windows 7…

BananaFresco: Can anybody with a little more computer knowledge advise if there are any risks with deleting everything it brings up? I attempted it on a surface pro 3 a little while ago and ended up having to reinstall Windows 10! If I remember correctly, it gave a few check boxes to choose from and maybe I clicked the wrong one?

suomynonAx: Did it on Monday to my uncle’s computer, 2.7gb

zigglezip: [Bleachbit](https://www.bleachbit.org/) is far more thorough, I’d recommend it over apps like ccleaner

dead_inside_me: Any YSK for Mac? I’m running out of space.

PhiladelphiaManeto: No one’s asked thus far… Is there a Mac equivalent?

gornzilla: 1.78 Gb on my girlfriend’s laptop that has never been cleaned. She’s had it over 5 years.

Calabrel: I have an OS on a drive that I don’t boot to anymore, it’s my secondary drive now and I’d like to reclaim that space again. Do I need something like this to remove those files, can it even do it? What’s your advice for handling that sort of thing?

SmartOneZ: There was a time few months ago on windows 10 if you used this feature it would cause bsod , I confirmed it by running it on a freshly installed windows , run this after you have updated windows I had to reinstall windows 3 times until I figured out what was causing the bsod.(there was an article only one at that time the author had dug deeper as to why this was happening)

widermind: i keep forgeting i have disk cleanup but i do use it every once in a while.

Kolocol: Disk cleanup is good but it missed a lot that ccleaner did remove. Like 1/10th of it

Mynameisalloneword: Idk if it’s too late to ask but will this help with my problem of my disk being at 99% usage? Even when I’m not running any programs.

Never_wrong_: You should avoid this with any SSD if I’m not mistaken

destinofiquenoite: Does it erase/delete saved passwords on browsers?

karljt: And unwanted previous windows installations if you tick the box.

adamdavenport: Why doesn’t the OS just do this for you? Why can’t it be automatic?

Feministenschranze: …or you could just enter “%temp%” (without quotes) into the Windows Explorer address bar and empty the folder that will come up. You won’t be able to delete everything and there *might* be side effects, but basically, this will free up some space when you’re in a hurry and need a few extra GBs.

As usual, I take no responsibility if this sets your computer on fire.

cloudnyne: Is it more beneficial to use hibernate than shutdown?

Noyes654: My SSD was way overloaded for ages even after cleaning it repeatedly. Downloaded CCleaner and it literally opened up half of the storage space.

NEVERxxEVER: You should also know that if you recently updated to the Creators Update for Win10 and you run Disk Cleanup, you will be unable to roll back the update if you have any problems.

This sounds crazy, but after I updated to Creators my computer wouldn’t even post. Sometimes it would boot into this weird mode where the screen was flashing red, green, blue, test screen; usually it would boot to a black screen. Maybe 1 out of 50 boots it would just boot normally. I thought it had to be an an Nvidia issue, which was weird because it was also doing it with onboard graphics. After 3 hours on the phone with Nvidia and removing both graphics cards twice, I figured out that it was the Creators Update. Rolled back and everything was golden.

But remember you only have 10 days or the Windows.old folder will be deleted automatically.

purple_kushy_pillow: The day that it mistakenly decides that it should remove a critical OS file is the day you will never run this tool again.

sj0352: YSK that one of the biggest space hogs on a PC is the cache that Spotify builds on your hard drive. Quite why a streaming service needs a zillion gigs of cache is beyond me but it is harmless to destroy (do it from within the Spotify app).

Land in a nice lake and a disaster of a plane crash could be a surprise lake party with a slide. Perspective my friends.

« YSK About An Effective Way to Get Rid of Unpleasant Memories and Feelings
I want to learn how to be more interested in others and talk about myself less. »