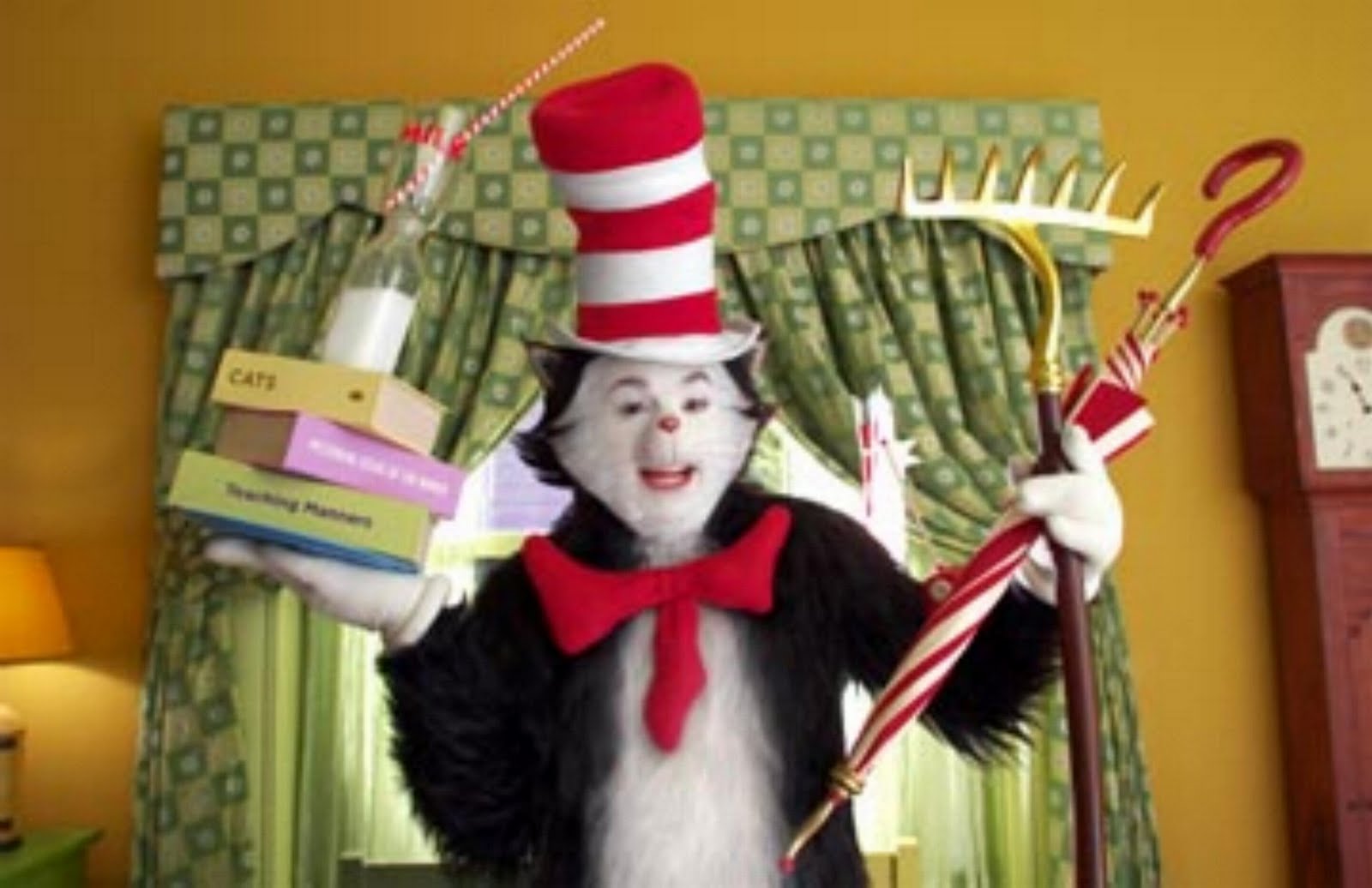 PutPuffyFluffyDown: “I’ll get you, and it’ll look like a bloody accident” – Bo Welch to Mrs. Seuss

notsomeguynamederic: *The movie was judged by some critics as the worst of 2003, she notes. Geisel says she will never again allow Hollywood to portray Seuss characters in live action.*

Maiden_14: We used to watch this movie at the day care I worked at. We’d die laughing at how fucking absurd it was. Pretty sure we enjoyed it more than the kids. TBH they loved that we were laughing so hard and always would ask to watch that movie even tho they had no idea what was going on. They just loved that it made their teachers laugh so hard.

Damn I miss day care. I love those kids.

zinkognito: Mike Meyers as the Cat In The Hat seemed like he was channeling his SNL [Linda Richman](https://www.youtube.com/watch?v=oiJkANps0Qw) character to me

Kurra: I thought it was hilarious, still enjoy watching it on occasion. Very strange movie.

Spetznazx: The whole baking show segment is absolute gold though.

jacoobz: Is it bad that I liked the movie?

Swayze_Train: Loved this movie. Maybe not a great translation of a Seuss work, but a great opportunity for Mike Myers to put on a clinic.

notsomeguynamederic: This was also after the live action Grinch Who Stole Christmas movie with Jim Carey.

bradbull: I still quote this movie all the time. Mostly the “aaaanything?” cupcake scene which can be used in a variety of day to day interactions!

BrianLikesTrains: Well to each their own, but it was one of my favorite movies growing up. And looking through the comments, it would seem MANY people feel that way.

Bats31: I don’t care that’s one of the best movies of my childhood. My siblings and I still quote it regularly

Xepplin: I saw this movie in the theater when I was 6 and absolutely loved the experience. Not because of the movie, I barely even remember it, but because my grandma bought me fun dip from the concession stand and my parents NEVER bought me concessions.

defiantcross: i love that movie, I dunno what these critics were smoking. As for the critics’ outfits…

“honey, that dress was ruined when she bought it”

Blix-: I fucking love that movie. Fight me, you old hag

icarus1973: Yeah, and the script for “The Cat in the Hat II: the Re-Hattening” was already greenlit. Those people had families!

eagleboy444: Damn I thought that movie was frickin hilarious!

AnomalousAvocado: There was a live action Cat in the Hat movie??

cey24: But the grinch was so good. Does that not matter

sandyravage7: I fucking loved this movie.

Bookwizards: What?? the movie is awesome

10202632: I don’t get this opinion. Me and my daughters love that movie. It was trippy and funny and sweet…just like most of Seuss’s stuff. We still have it on DVD. I think I’ll ask them to watch it with me tonight.

darkjungle: “Where did you come from?”

“Well, when a momma cat and a daddy cat love each other very very much…”

Yeah, I think I can see why she might have issues with it.

TommyGunn067: To be honest I loved that movie when I was a kid.

spmahn: The Cat in the Hat was a film Mike Myers agreed to do after he refused to make the Sprockets movie (The SNL sketch) because the script was so awful and he was under contract to Universal and they were going to sue him. I’ve always wanted to see that Sprockets script because I can’t fathom how terrible it must have been that Cat in the Hat was actually better!