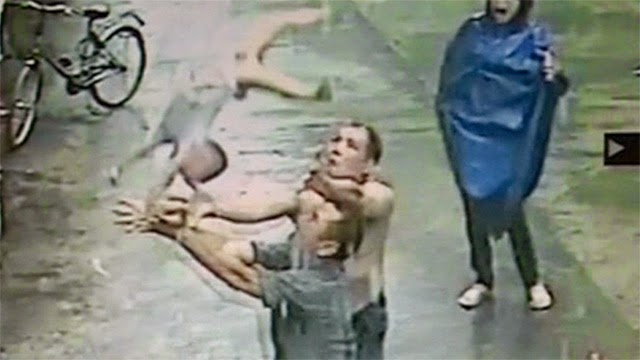 GoodnightElizabeth: This of course led to the sinking of the Titanic years earlier.

Azraidel: I wonder if he was walking by the house like
“Hmm, I remember that time a baby just went and fell out the…..Is that a baby? That’s **the** baby!”

I_WANT_CEI_HYPNOSIS: That baby has got to be jumping. Perhaps it only jumps when it sees that particular guy.

zomboromcom: Wat no. If a baby falls you can’t get your scent on it or the mother won’t return to it.

remotecontrolkev: What is your reaction supposed to be when you catch a falling baby *a second time*

This guy probably just looks down like “F—, again?”

BiBoFieTo: I’m picturing this guy circling below their window like a shark, just waiting for babies.

StillUseLandlines: “It wasn’t until 1933 that they realized John’s head emitted a high pitch signal only babies could hear. At this point, he had caught 7 babies on 8 different occasions!”

RPFM: None of this is based in fact. Like, at all. Why would anyone believe these 3 sentenced stories and claim them as true?

cynikalAhole99: …and were later married.

longbowfosho: How long was this kid gonna just stay a baby? I’d try to kill myself too.

PingTiao: Somebody failed to hit a man twice with the same thrown baby.

fausion: the man was obviously the baby from the future and he travelled back in time to save himself who was a baby at that tinw

PastelFlamingo150: The mother, however, was smacked upside her head.

L0gical_Parad0x: And that baby was the man’s father.

OccasionallyLazy: It’s funny how when it’s fun we don’t question sources. These days we should know better

does2matter: For everyone questioning how?

DatCuriousDude: I think bird law makes that baby his after that, right?

magnament: …It kind of sounds to me like this guy was trying to steal a baby.

BlumBlumShub: This sounds like the opening to a riddle.

ZanyDelaney: This one has been circulating for awhile along with the [two brothers killed by a taxicab on the same Bermuda street a year apart](https://skeptics.stackexchange.com/questions/20498/were-two-brothers-killed-on-the-same-moped-by-the-same-taxi-driver-exactly-a-ye), and [the haunting story of Alice Blaise and Roger Lausier](http://www.nzherald.co.nz/world/news/article.cfm?c_id=2&objectid=3542783).

repeat-: I refuse to believe this.

itstimetofifa: I remember my parents telling me before i was born they went to sydney and near circular quay a young boy was on the escalators and decided to hang of the railings and fell at the top what wouldve been a 20/25 metre drop(anyone from sydney will know what ones im referring to they are huge) and my dad caught him, he said it was the scariest thing hes evee been involved with cause it was potentially life or death

Random-Miser: I mean, you drop a baby out of a window once, sure accidents happen, but twice? That’s just bad parenting.

stobss: It was the first floor and the man was the father.

shitsnapalm: This reminds me of the movie the Antichrist. I prefer this version of the story, less genital mutilation.

Duck_Duckens: I read, “baby elephant” for whatever reason and the whole headline turned way wierder and later funnyer than it actually was.

Gehhhh: Did Danger Dolan steal a script from this years prior to now without me even knowing? THIS is chilling!

redditeyedoc: Call CPS on that family

tmotytmoty: That baby must fall out windows a lot.

JavierTheNormal: It’s like looking into the future of YouTube stunts. Or maybe it just randomly happened. Maybe.

PickleMorty420: Third time he gets to keep

TheFrenchPoulp: Begs the question: how old was the baby to still be a baby a year after?

restlessleg: plot twist… the kid grows up to be ‘jigsaw’

Megahertzz: I missed the H in unharmed. Spent too long pondering the relevance of the man and the baby not carrying weapons.

sunz24: Then he became a driver,but his name was still baby.

Rufzeichen: > Sometimes things happen that are beyond are control

BrianUrlachersSong: And that baby became captain of the titanic. Makes sense as to why it hit the iceberg. Babies can’t drive.

imagine_amusing_name: Martha, stop throwing Clark out of the window, that guy down below is going to need therapy.