Why do lithium ion batteries capacity diminishes after each cycle? I’d like to know what happens chemically or structurally. 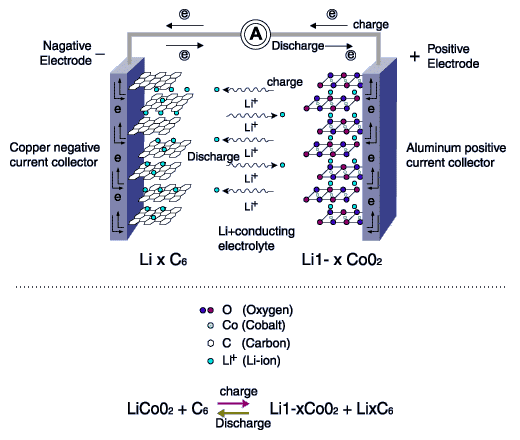 llevine5: I am a battery test engineer. There are many ways lithium batteries can degrade, but since this is ELI5, I’ll stick to one main method.

Batteries have a few main parts: the anode (negative), the cathode (positive), a separator between them, and some stuff in between (usually a liquid) that conducts ions. When you charge a battery, you are cramming a whole bunch of lithium ions into the anode, kind of like absorbing water into a sponge. When you use the battery, these ions flow to the cathode, generating electric current. Over time, by cramming the ions in and out of the anode and cathode, you begin to damage the ‘sponge’, so it can’t hold as many ions any more. So your efficiency goes down.

You already know that batteries are a chemical process. It reacts one way to generate electricity which we use to power your devices. When you run electricity into it, it reverses the chemical process so that it can react another day. But nothing ever happens *perfectly*. Something’s gotta give. In our case, the electrodes get slowly eaten away in the process and eventually the performance falls below what we find acceptable for running our devices and we get a brand new one.

spinningmagnets: LTO / Lithium Titanate Oxide is the best at long term life-cycle. Nickle-Iron is actually better, but the energy per mass is so low, its impractical.

Regular lithium 18650 cells (NCM/NCA), suffer from oxidation, especially when they get hot at the full charge.

steve204: Most traditional batteries have an anode and a cathode. The anode and cathode material is pasted or painted on a current collector. Lithium cobalt oxide is a popular cathode material and carbon/graphite is a popular anode material. Lithium ions are the positively charged particles that intercalate (move) from the anode to the cathode during discharge and from the cathode to the anode during charge. Charge has to be maintained, so electrons flow from current collector to current collector to balance the movement of lithium, resulting in electricity/current flow. During this cycling, some of the lithium ions irreversibly react with other species in the battery and are no longer available to move back and forth between the anode and cathode. This is what causes a loss in capacity. These side reactions can vary, but generally involve lithium moving from an ion in the liquid phase to its solid state or the development of dendrites. A secondary method that can cause capacity loss is the breaking of electrical contact between the anode or cathode material and their respective current collectors because there are some stresses associated with the lithium movement.

IonLoveTheseHoes: If i replace an old phone battery, should the phone be almost back to normal?

Slydruid: Entropy is the answer for the degradation.

Chemically batteries give up and gain electrons.
This is called oxidation and reduction. The element giving up the electron is OXIDIZING and the element gaining the election is REDUCING. When the electron leaves an element and goes to the other element that creates voltage.

If we look at zinc and copper the voltage given off from an electron leaving zinc and going to copper we would get 1.1V (at standard conditions). To “recharge” you apply current which causes the electrons to move back to the zinc and then flow towards the copper again.

Due to entropy and us living in an imperfect world after so many charges there will be an abundance of electrons on one side or another causing a cathode or anode to be bigger.

The cathode and anode sit inside a solution of its own salt. So the zinc will sit in something like ZnNO3 and the copper will be in CuNO3. These are electrolytes because they both disassociate to form Zn + NO3 and Cu + NO3. So as the reaction occurs and electrons are transferred to the cathode the Cu is taken out of solution and forms onto the solid copper. Thus making the cathode bigger.

ShitInMyCunt-2dollar: Ideally, there should be only certain types of reactions happening during charging and use – but impurities (either present at the beginning or generated by unwanted reactions) can build up and affect these reactions in a damaging way. Crystal structures can change and unwanted chemical species can build up and slowly degrade the performance over time.

exobloom: While there are people here who are knowledgeable about this – why do some batteries of well-known producers inflate?

dude_who_could: For anyone interested in making their batteries last longer. For lithium ion batteries (not other kinds that retain a “memory”), your battery will live longer if you don’t allow it to discharge all the way, say you always kept it above 60%, it may last as much as 3 times longer

« ELI5: How does sunscreen help protect our skin?
ELI5: How do flares stop missiles? »