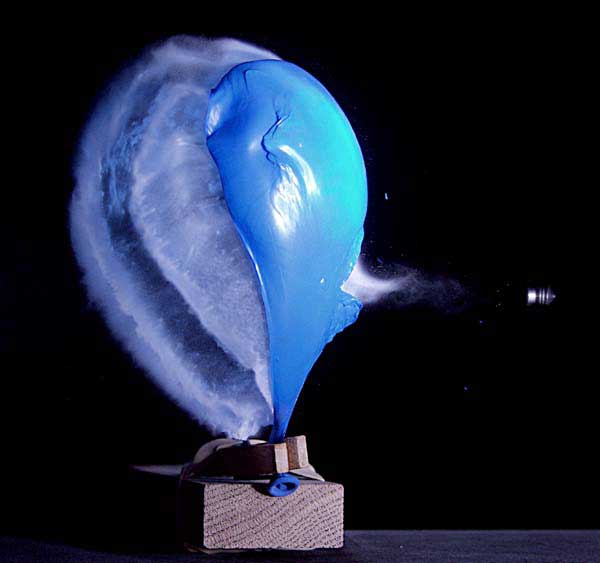 FlipSchitz: A balloon is essentially a vessel of compressed air. When the balloon pops, all of the air inside is released instantly and forms a pressure wave as it disperses to return to atmospheric pressure. You perceive the pressure wave as a loud noise when it strikes your ear drum.

thegnome54: Imagine you had a phone booth full of water somehow sitting on the surface of a calm lake, and suddenly its walls disappeared. The water would rush out of it and create a wave that shot out in all directions until the lake evened itself out again. This is similar to how all of the air squeezed up inside a balloon pushes out and creates a pressure wave that you can hear when it bursts and equalizes with the air around it.

People are pointing out that the balloon pop itself isn’t really all that loud, it’s mostly the acoustics of the room around it. To understand this, imagine you have the same phone booth sitting at the middle of a circular swimming pool. When the water rushes out, the resulting wave will bounce off of the outer edge of the pool and rush back inwards. It can then combine with itself and cause even bigger waves! Where the water in the lake will soon just have a small wave spread over a large area, the pool water will still have really big waves for a while after as they bounce around and interact with each other. If you pop a balloon in an ‘anechoic chamber’ (basically like a pool whose walls absorb waves completely and don’t let them bounce back) then you’ll only hear that first smallish wave of pressure.

jquinnifer: But bubbles don’t make a loud sound when they pop?

LunarXero: Most of the answers I’m seeing are missing a key point. It’s the tension.

Itsjustnotborus: Follow up question: what happens popping a balloon in space?

dukesdj: It doesnt. A balloon pop is actually quite! What makes it loud is reflections and reverberation from the surroundings. Dont believe me?

ol_norm: ^^See thread following question posed in parallel form to sub’s format intended to be humorous. My intentions were benign. You don’t know me.

« ELI5: Why are there such virus inducing ads on nearly every site? And who lets them stay there?
ELI5: Why do you sometimes wake up more tired with more sleep, and more energetic with less sleep? »