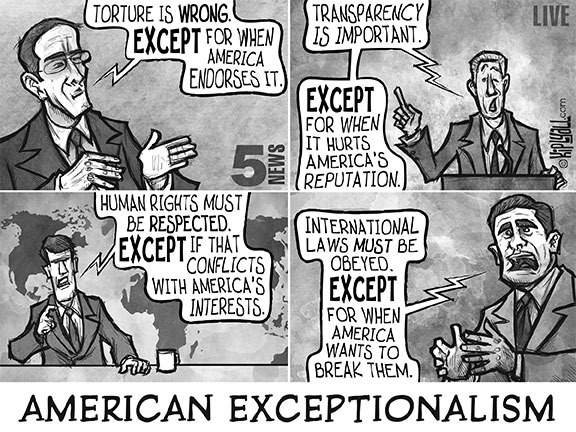 LpztheHVY: In its simplest form, American Exceptionalism refers to the idea that the United States is special in someway that makes it better than all the other countries in the world.

Depending on the person, someone might have a different idea of what that means. Some people would say that because of our commitment to constantly trying to progress, we have a capacity for change that’s different from other countries. Other people would say that in some way God has blessed our country specifically to lead the world. And a lot of people might reject the idea altogether and say we’re pretty good, but not uniquely special.

lobster_conspiracy: It is the belief that the United States of America occupies a very unique (exceptional) position as a country, due to the historical circumstances of its creation and development in to a world power. And as a result of that, it can and should (if not must) take a leadership role in global affairs, because it can use that role in a way that no other country (existing now or in the future) could. It should not be confused with a simplistic idea that the US is “the best country” simply because of what it is or has achieved; it is more about the potential that it was born with. It can get kind of mystical as a sense of destiny as “the chosen one.”

It’s like if your high school class was choosing its class president, and there was this one kid who was popular, had top grades, athletic, etc. Even if he wasn’t interested in being class prez, everyone knows that it has to be him, nobody else would be able to do as prez what he could. If he understands how exceptional he is, he will accept the role. Similarly, American Exceptionalism has the idea that the U.S. has to accept the role for the sake of the world.

ViskerRatio: Originally, the notion of “American Exceptionalism” derives from the fact that the United States was a nation born without hereditary nobility/monarchy – it was a nation purely of commoners.

To 19th century thinkers, this utterly demolished the conventional lines of ‘class’ and the basis of most politics. It made the U.S. an exception to the normal rules of politics.

In the modern day, the rest of the world has largely caught up with the U.S. What vestiges of the old noble order have largely been swept away – even the English monarchy is more like their own particular variant of the Kardashians than a legitimate ‘class’ exercising meaningful political sway. However, the U.S. still remains ‘exceptional’ in many ways – most notably in terms of religiosity and optimism.

dkf295: Anything the speaker considers to be a trait about America that is exceptional, or the sum of all (subjectively) exceptional traits held by America. There’s no official list or anything.

« ELIF: How do goats have such good balance/fearlessness for jumping on precarious ledges?
ELI5: If the common cold tends to be a different virus each time (hence why you can’t necessarily prevent it), why do you have nearly the same symptoms each time? »