How do viruses just appear again? 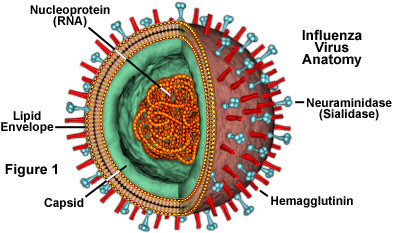 Skatingraccoon: There are many different explanation as to why there’s a flu season (a surge in influenza cases around a certain time of year), such as:

* People spending more time indoors, and subsequently in closer proximity to one another.
* Less exposure to ultraviolet light that could damage/destroy the influenza virus before it can infect someone.
* Cold temperatures drying up mucous membranes (reduces body’s effectiveness against respiratory viruses)
* Cold temperatures preserve the virus longer on surfaces people come in contact with.
* Less Vitamin D production in the body leading to a reduced immune system.

Research in Guinea Pigs has shown that the virus is more efficiently transmitted in cold, dry air than in warm/humid air, and that it has a casing that hardens in colder temperatures (the casing typically melts in your lungs, but obviously it is degraded in higher temperatures, too).

Also, there’s no hard start date for the “flu season”, it’s just a general term to describe the time frame in which doctors and scientists observe an uptick in flu activity. It’s not attached to any set calendar date.

Influenza as with other infectious diseases is always around in someone, but only becomes more prevalent during certain seasons when it spreads most effectively.

Concise_Pirate: It lives in people and animals — just in smaller numbers when it’s not “in season.” It does’t go 100% out of circulation.

It’s just like fresher’s flu. You get it because suddenly you’re surrounded by thousands of people and thus more likely to get the flu and spread it.

Bloke101: It’s actually the fault of all the ducks living in China. As many have noted here already the virus is with us year round and a number of environmental factors tend to influence rates of infection. However, the virus constantly mutates in this instance the largest reservoir of the influenza virus is water fowl living in parts of China.

You have no doubt heard of bird flu or avian influenza, that is the strain of the virus that naturally lives in birds, ducks, geese and chickens mostly. as such it mutates and occasionally one of those mutations crosses over to infect humans. This goes on fairly constantly and it typically takes 3 to 6 months from the point where it emerges in China to the point where the rest of the world is infected.

Your vaccination only works for one season because the next mutation comes along and the old vaccine is no good. the people who make the vaccines are always out sampling for the next emerging strain and attempting to guess which one they need to make a vaccine for, that is also why on occasion the efficacy of the vaccine is low, they guessed wrong.

Not all strains are equally potent, about every 100 to 120 years a really nasty deadly strain emerges, the last very bad occurrence was in 1917 the famous Spanish flu that killed more people than WW1 that was occurring at the same time. back then there were no vaccines and people tended to die very quickly (24 to 48 hours). the outbreak went around the world but not all parts of the world were impacted at the same time.

Once you have been exposed to a specific strain your natural immunity takes over and you are not likely to be reinfected with the same strain. But next years version could easily get to you.

There are a lot of variants of Influenza A, Pigs, Horses, Seals, and even cats/dogs many of them can cross over.

zeldiferous: The flu is still there in the summer, people still catch it. It just spreads at a higher rate during the winter, and that’s largely down to people spending much more time in doors in close quarters, and the environment being less damaging to pathogens in the air and on surfaces (since heat, humidity, and sunlight kill things faster).

CallMeAladdin: I don’t have a source except my Bio 101 teacher told me the reason why there is a new flu vaccine every year is in part due to international travel. The flu progresses during winter in another part of the world while it’s summer here and during this time mutates. Then during our winter when everyone is more susceptible we all start getting it and it mutates here, etc.

Dynamix_X: It’s been waiting in big pharma warehouses, secured by government security forces. To be released at intervals throughout the colder parts of the year.

anusmold: The flu’s always been here. The cold just weakens your imunne system, making it easier for the virus to bypass your defenses.

neosinan: Basically(Since this is Eli5), To Flu virus to make people sick it needs certain temperature among other conditions. But it is always everywhere, no escaping from them, only not giving it chance to make you sick.

« ELI5: How peeling scotch tape in a vacuum creates radiation.
ELI5: What is happening to the body/brain of a person who has taken a dose of LSD? How does LSD cause hallucinations? »