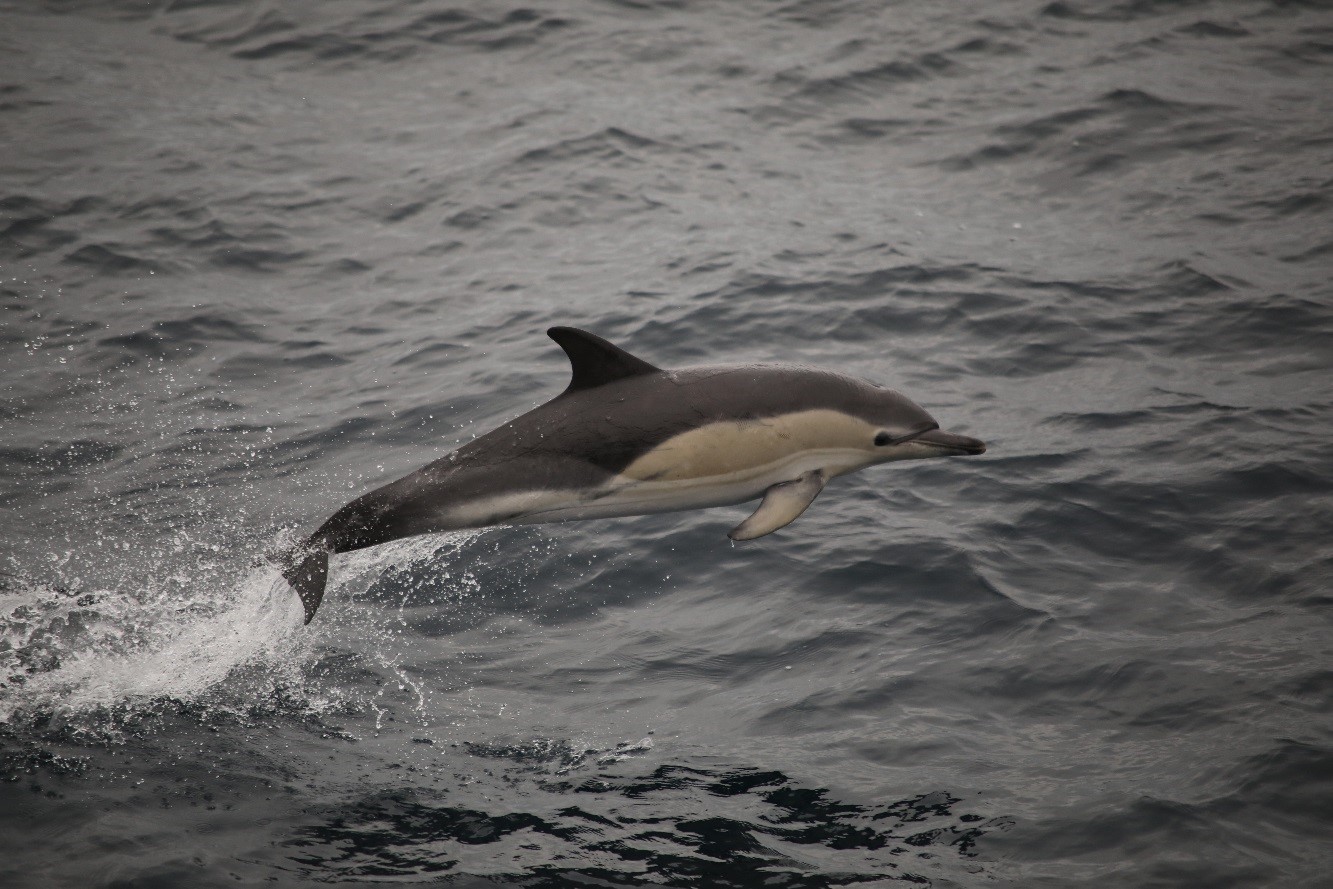 It seems to me that it would be really tough to surface during some of the storms I have seen on youtube (aircraft carriers seemingly thrown around). How on earth can a tiny dolphin surface and get an appropriate breath in without pulling in water? does their respiratory system have a special valve in it to ensure water can’t get through?

joechoj: I think you’re greatly underestimating how comfortable marine mammals are in the ocean. They’re literally in their element. They pop up and take a breath, no big deal. If you’ve ever seen seals in a high surf zone, they just bob & float with not a care in the world, and duck underwater at the right time to avoid injury. And *that’s* near a rocky coast, a far more dangerous environment than the open ocean.

For one, marine mammals are flexible, compared to the rigid hull of a ship which is prone to breakage.

For another, they’re small & nimble compared to aircraft carriers & tankers. Surfacing during huge swells would feel more akin to an amusing ride than a life-threatening scenario.

They’re also made to be *in* the water, not on top of the water. Trying to keep an open canoe afloat in rough weather would be a harrowing experience. But simply floating an incredibly buoyant body near the surface? No challenge whatsoever.

Marine mammals are incredibly well-designed for taking quick gulps of air, and in large seas it’s easy to time breaths so they don’t take in gulps of water. Finally, I’ll add that all marine creatures are by definition fine-tuned to ocean living. Even experienced humans (surfers, for example) can feel inertial changes underwater and sense when wave crests are approaching. Marine mammals’ ability to read water far outstrips ours, as you can imagine, which would give them further ability to withstand, even enjoy, large seas. At sea you can often see dolphins surfing the swells, and I wouldn’t be surprised if they used large storms to their benefit, traveling long distances with minimal effort.

Not to mention – whales and dolphins can leap from the water. Not sure if they are able to grab a breath while doing so or not.

Edit: Don’t forget – some of these critters can hold their breath for 30 minutes or more. If you only need a couple breaths an hour, what are the chances of that violent storm just sticking around long enough to even be a challenge?

AgoraiosBum: The surface of the ocean away from land during a large storm isn’t full of breakers – it’s just rolling wave after rolling wave. The waves can get quite large, but keep in mind that the animal is mostly under the water. It can surface on the back of the wave and ride the wave down to the bottom of the trough and breath that entire time, and then just submerge and the bottom of the trough.

it takes a little bit more timing than on a calm surface, but otherwise is basically the same operation.

EpicHappyFunTime: Whale Watching Captain/Naturalist here. Cetaceans exhale most of their lung contents AND inhale in less than a second. Even while they are breathing “normally,” they hold their breath between ten and thirty seconds. After a handful of breaths they often “sound” (diving deeper, and for an extended period of time- anywhere from 5 to 90 minutes depending on species). For developed adults, a storm would be well within their comfort zone. However, a storm would very likely present a threat to newborns and perhaps very young individuals. This is believed to be part of why some species (though not all) migrate to calm, warm, and protected waters during their respective winter months (when storms are most prevalent). I hope.my answer helps 🙂

bumble_bear: I don’t know the answer to the question, but I had a neat experience kind of related. I used to work on oceanography research vessels and once while off the coast of California, approx 400 Miles west of point conception we were in 40-50 foot sustained seas. I read another response on here that said open ocean swells don’t break – this is not true, they absolutely break and it is terrifying. My particular lab could not do our research in these conditions, so I would stand on deck for hours and marvel at the power of the ocean. The ocean when it gets crazy, feels dreamy to me, like the waves are surreal in their power and magnitude. Holy shit I just got the chills thinking about this. Anyway, I was standing on deck and saw a momma blue whale and her calf riding 50 ft swells. They were just nonchalantly traveling through the ocean at like 15 knots or something absurd. Marine mammals live in the ocean and are well adapted to their environment.

took_a_bath: I wanna know how the fuck humans breathe in the rain! Do they wear, like, perforated plastic masks over their faces?

faykin: 1. Different sized bodies experience waves differently. To toss an aircraft carrier around, the waves have to be very large. Those large waves mean a smaller body, like a dolphin, will experience that huge wave as a (relatively) flat area. This is relatively non-intuitive, but give it some thought, and maybe do some experiments with a rubber duck in ocean waves.

2. Most storms move between [10 and 30 mph](http://www.aoml.noaa.gov/hrd/tcfaq/G16.html). This means the really turbulent areas can be avoided by moving around the storm. Human ships tend to be on timetables, which constrain them from avoiding storms. Dolphins are more free to avoid the storm’s path.

3. Dolphins don’t have any sort of water-catching system to prevent breathing in water. They have powerful diaphrams, and can completely exhale, then inhale, in under a second. So they depend on having their blowhole completely clear while they breath.

mwilliams7187: …..So apparently I made it 30 years without knowing Whales and Dolphins breathe air. What are you telling me right now? I know they have blow holes but I never once thought they used it to breathe. I just thought it was somehow related to food. Like they eat something and the stuff they don’t eat they blow out through the hole.

jrm2007: Here’s a dumb question: Why would mammals that live in the water not evolve the ability to breath underwater? It would be a selective advantage, it seems like. Maybe the oxygen requirements of large brains are such that gills won’t provide enough? I realize it also sounds silly but given that more than one mammal actually lays eggs, gills don’t seem so crazy. The eye of the duck-billed platypus is supposed to be closer to the eye of, of all things, the hagfish than to the eyes of other mammals which also sounds as crazy as gills would be.

EbolaFred: Freaky. I thought of asking the same question this morning.

Did the thread on submarines make you ask this question?

« ELI5: why is math (statistics, calculus, etc) so important for a strong programmer?
The Saiga antelope looks like an animal out of a science fiction movie or video game »