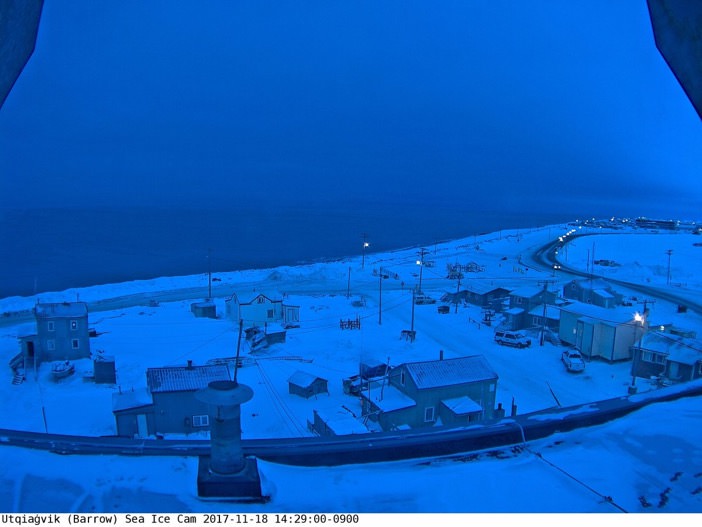 cyclefreaksix: This is why vampires love Alaska.

itspronouncedkrejci: We’ve all seen the movie. We know what’s about to happen to those poor townspeople

jibberwockie: I had a look at this web cam, nothing much going on but still interesting. The web page has one of those world maps with the location of people around the world who are currently accessing it. I find it fascinating to see the tiny blinky little light that is me, blinking away at the southern end of New Zealand.

raytrace75: So does it get pitch dark, or is it like twilight?

Ketameandreams: Is there any kind of celebration or festival or holiday of some kind revolving around these days? Or maybe in some of the cultures native to the region? Pretty profound to not have sun for a couple months

Meetchel: The median household income in Barrow is $83k – shocked me when I first heard it.

cudderisback_: I would love to travel there, or any other place that experiences prolonged darkness, once in my lifetime.

FranticDisembowel: Maybe it’s just me, but there’s something calming about hiding from the world for a couple months. Like when you go under the blanket and take a long nap.

onewaymutha: Until then, the liquor will be our sun.

JasonsBoredAgain: Looks a lot cleaner since they cleaned up after that last 30 day bloodbath.

ejs2000: Just to be pedantic, Barrow’s official name is once again Utqiaġvik, which is Inupiaq for “a place for gathering wild roots.”

GulfTango15: This is almost the only reason I love south Florida!…

Gotta_havva_wawa: God i would give ANYTHING to live there. Theres 2 things in this world i love more then anything. And its darkness and snow!

kendricklebard: When I worked in Alaska in the summer we would finish around midnight and it would still be super light. It would be “twilight” dusky around 3am but it never got completely dark. It’s wild you feel like you can work all day

AndyWarwheels: Why would anyone live there?

IAmTheSilentPlanet: No thanks. I rather like the sun and am not willing to part with it.

DecentUserName0000: How does this work? Explain it like I’m five lol

Psychotic_Precision: Why do people live there?

PMmeSWIFFERsweepers: I don’t know why anyone would willingly live in Alaska. It’s like voluntarily giving yourself a drug addiction, alcoholism and weekly doses of domestic violence.

Serifan: That’s cool,they should set a movie In a place like this where vampires come and feast on the inhabitants.

MakuyiMom: After that movie, I’m sacred of vampires and no sun. Holy shit

korievans: How do they not get depressed?? Doesn’t something physically happen to the mind and body if you don’t get sunlight for so long?

tastydolphinbabes69: I want *so so* badly to visit Alaska with my boyfriend. Cold weather is my jam.

bonafart: Do they have a ceremony or something?I’d so be making that a day to sing lullabies only.

caydos2: Why the hell doesn’t the sun come up during this time of the year?

Voklwinter: I have doctors that rotate and work one week a month in barrow. They love it and the people. Even agree with the whale hunting.

Uncaring: hey my hometown. did you get your vampire killing license? Also this is on top the wells fargo bank and offices. I’m surprised someone did something like this.

kanjeclub: Hello from sunny new Zealand where the summer is really starting to kick in. Over 15 hrs of sunshine today and a nice high of 25 Celsius, not a cloud in the sky!

twistedbubble: Is the night sky spectacular? Like amazing tons of stars?

japroct: Ok, now I have to download 30 Days of Night again….. It fits.

DredyDred: They have one hell of a basketball team up there.

MollyDiesAtTheEnd: January 22nd will be my birthday, what a nice birthday present for all of you in Barrow! I’ll probably be so hungover it’s going to feel like the first time I saw the sun in months too, an early cheers to you Alaskans!

sandieeeee: Won’t people there be vitamin D deficient? Or whatever vitamin the sun gives you

teeeeh: Nice to see the barrows brothers have kept the family going strong!

Pie-Pan: Get the Prozac out max dose!

cyanide4suicide: Reminds me of that movie 30 Days of Night

kenaijoe: how do flat-earthers explain parts of the earth getting different amounts of sunlight than others?

« TIL that Aeschylus, the ancient Greek tragedian, was supposedly prophesied to die from a falling object, and therefore stayed outdoors. He was killed when an eagle dropped a tortoise on him, mistaking his bald head for a rock.
TIL The League of Women Voters used to run presidential debates that gave every nominee a equal amount of time to speak, Republicans and Democrats joined together to make the Commission for Presidential Debates, making it harder for third parties to be fairly represented »